Today it is my pleasure to Welcome author Mel Teshco to HJ!

Hi Mel and welcome to HJ! We’re so excited to chat with you about your new release, The Virgin Hunt Games volume 2!

Hi HJ and readers, thanks for having me back again so soon 🙂 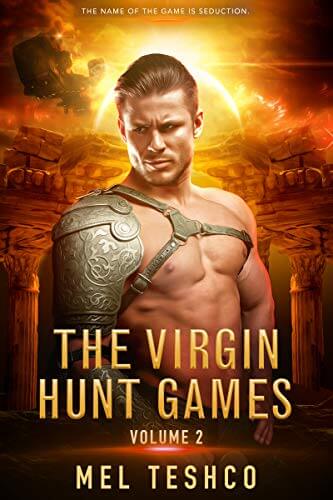 Ten new hunters (men) and ten hunted (women) enter the Virgin Hunt Games once again, which is held every four years in place of the old Olympic Games. The hero this time is a freed sex slave who has never had an emotional connection to a woman. The heroine is a virgin who will do whatever it takes to free her parents from evil investors.

The Virgin Hunt Games countdown began, and the crowd’s roar of excitement shook the amphitheater.
“Ten! Nine!”
Adrenaline flooded through Tamsin Mercedes’ whole body and she fought for breath as her lungs tightened. Oh God. This was it.

There is instant chemistry between them, the emotional connection comes much later. As in all the characters in these Games, though there are only seven days for them to get to know one another the intense danger every second of every day seems like a lifetime.

He cupped her chin and she swallowed hard at the electricity sparking through her nerve endings. He said huskily, “Allow me to apologize in advance for fucking you. But as you are my mate for the duration of these Games, I’m left with no other choice.”
She jerked her head back, his touch suddenly abhorrent. That he apologized for having to do the deed with her was like ice-cold water thrown on her face. “Don’t. Touch. Me.”
He dropped his arm back to his side and raised a dark brow. “You might fight against it now, but I promise your screams won’t be from protest.”
He said it with such confidence, with such knowing, that she was both repelled and enticed. Although her body leaned toward the latter, the former won out in her mind. Who the fuck did he think he was? He was probably some two-stroke lover who didn’t even know where her clitoris was located!
Except the thought no sooner formed before it was rejected. If anyone knew how to pleasure a woman, she had a feeling this man did. There was a raw and primal confidence about him. Something that told her he had been with more than enough women to be sure of his ability with the opposite sex.
His eyes glittered, as though aware of her thoughts. Then he swooped his head low and pressed a slow, heart-stopping kiss to her mouth. Holy smokes, did he know how to kiss! All her fight died as every one of her nerve endings erupted into life. His mouth was drugging and intoxicating as he effortlessly commandeered her into wanting more…needing more.
When he pulled back, she ran a tongue along her electric-charged lips and gazed mutely up at him. For fuck’s sake. She wasn’t supposed to want her mate. She wasn’t supposed to be anywhere near him!

I have SO many (as usual!! LOL) But having the characters confess their true feelings would have to be THE moment in the book. Here is a snippet:

“I had to find you. I had to fight for you.”
She turned to him, and he wished he could see her eyes…could read them. “You don’t need to fight for me. Not anymore. I don’t want to be with anyone else. I want only you.”
His breath caught. “Your credits—”
“Will mean little if I give up everything and everyone I value to get them.”
He smoothed some wild strands of her hair behind her ear. “You don’t know what it means to me to hear you say that.” His voice cracked. “I feel the same way about you.”
“It’s crazy—we’re crazy. It’s been only six days.”
“That’s all the time I need to know how I feel about you. I love you, Tamsin. I think a big piece of me fell for you right from the start—from the moment I saw you looking so small compared to the other hunted, yet there you were, standing so straight and tall, an angel with a heart of steel, ready for battle.”

Definitely the setting, which I’ve tried to show in different ways with every opening scene. The feel and the vibe of the whole Games, the players anticipation and nervous energy, the crowd’s crazy adrenaline. Snippet:

Tamsin was standing with the other hunted on one of the twin platforms that cantilevered out from the huge six-story tower where the Games would take place. On the other platform the ten male hunted stood tall and impressive, their muscles straining and arousals bulging as they threw the women lewd glances. Behind them, the tower loomed ominously. Each level inside the tower was fitted out to be a different kind of intricate, spectacular setting, and each was filled with perilous things—both inanimate and alive—deadly hazards that the contestants had to face and defeat—or die trying.
That was in addition to the hunt itself. A hunt in which the warrior males came after the females for one sole purpose—taking their virginity.
The Virgin Hunt Games had been established in the mid-twenty-second century by the UOC—the United Olympic Committee—after the old Olympic Games were terminated for being too boring for the jaded audiences of the day.
The rules of the Games were fairly complex, but basically, each hunter was assigned his hunted through a random drawing. A hunter who fucked his hunted before having sex with any other contestant won massive credits. And if a hunted was able to preserve her virginity she won equally massive credits. But if she lost her virginity, she was able to earn credits by fucking any hunter who hadn’t claimed his drawn hunted. Generous extra credits were given to all contestants for orgasms and kink. The person with the most credits—and who was still alive—won.
The idea was to royally entertain the eager screener audience—billions and billions of beings throughout the universe would be glued to their viewers for the next seven days, watching the participants have sex…or die. Ratings and wagering would be through the roof.
Tamsin swiped a shaky, damp hand down her blue singlet top and dark denim shorts. She figured the betting on her was probably pretty thin, given her low odds of winning. Hell, she couldn’t believe she was actually doing this. She was a twenty-year-old virgin—a human—with nothing more compelling to show for herself than sheer willpower.

Who loved volume 1. Also those who enjoy sexy, action packed sci-fi romance and who would love to read an adult version of the Hunger Games.

I’m currently working on book six of The Virgin Hunt Games and doing a couple of contemporary side projects (Resisting the Firefighter) which helps to keep my brain from flagging.

Giveaway: I’ll be giving away a 5 dollar Amazon gift card to one lovely commentator 🙂

Sure thing! In this scene the heroine, Tamsin, and two other hunted who are twins are running from the hunters behind them. Except the hunters aren’t the only danger in the six levels of the tower…

One innocent virgin. One jaded lothario. One life and death Games, a dazzling fortune to the winner. But first one must survive…

Tamsin Mercedes has led a charmed life. Her loving parents, scientists who research groundbreaking drugs, have given her everything she desires…until evil investors blackmail them to develop new, highly-addictive drugs. Tamsin won’t have it. Sacrificing her innocence as a Hunted in the Virgin Hunt Games is a small price to pay them off. But first she must win…

Sex-trafficked in his youth by his drug-addicted mother, Landry Marx now knows well how to please a woman physically. But he has yet to find a woman he connects with on an emotional level…until he meets his assigned Hunted in the infamous Virgin Hunt Games. Tamsin is incredible, their chemistry explosive, and the more he gets to know her the more his guard comes down.

But what happens when Landry discovers Tamsin’s parents made the drug that killed his mother…
Book Links: Amazon | B&N | iTunes | Goodreads |

Mel Teshco loves to write scorching paranormal, sci-fi and contemporary stories. Not easy with five cats, two dogs and a fat black thoroughbred vying for attention, especially when Mel’s also busily stuffing around on Facebook. With only one daughter now living at home to feed two minute noodles, she still shakes her head at how she managed to write with three daughters and three stepchildren living under the same roof. Not to mention Mr. Semi-Patient (the one and same husband hoping for early retirement…he’s been waiting a few years now…) Clearly anything is possible, even in the real world.
Website | Facebook | Twitter | Instagram |