Hi Tara and welcome to HJ! We’re so excited to chat with you about your new release, Their Second-Chance Baby!

I’m so excited to be here celebrating my 100th Harlequin release with you! 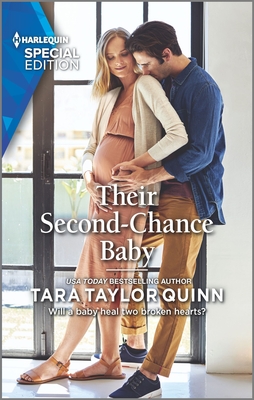 It’s my 100th published book with Harlequin and is the sixth book in The Parent Portal series. It’s the story of a woman who sacrificed much to be a cop. She’s in her late thirties, a lieutenant who’s saved many many lived, and realizes she doesn’t have enough of one of her own. She never recovered from her divorce years before from the Jag lawyer who was the love of her life, and determines that rather than looking for a man to complete her, she’ll have her inseminated with donor sperm and start a family. Except…she finds that her eggs have aged to the point of no longer being viable. Her only hope of having a baby is to use the embryos she and her ex had created years ago when he’d been going off to battle. After not seeing him in ten years, she goes to him to ask his permission to have their baby. He refuses.

“When I saw him, the way our marriage ended was right there in the room, like a physical thing.”

Having grown into a strong woman myself, I wanted to explore a strong woman in a needy position and being able to let love help through her.
The idea of embryos being viable for up to 20 years got me to thinking about why one would keep them that long, and what wonderful love could come out of them.

I get to know my characters the same way for every book I write. I take them with me everywhere I go, and they sit with me in everything I do. If I’m at the table eating, they’re there. At the grocery store, they’re there. I might realize that a heroine hates to shop, or doesn’t like beets and the reason why will just spill itself right there in the beet aisle. I see a father with his child and my hero will notice, or not. Will approve of the treatment, or not. And let me know, and tell me why he holds the opinion strongly enough to bring it to my attention.

Maybe not my favorite, but one of them…later in the book when Annie and Seth have become friends as they deal with medical situations, they’re sitting on her couch scrolling through shows to watch as they wait on a test result, and he suddenly tells her he loves her. It was so not time. This couple is no where near to being able to have a relationship. The issues that broke up their marriage are still right there in the room with them. But so is the love. And it wouldn’t stay silent. I absolutely did not see that coming, but when it hit the page, I knew it had to stay.

At the beginning of the book, Annie is going to see Seth for the first time in ten years and there’s been such a build up emotions – if he won’t let her use the embryos she’s coming to ask for, her chance of a biological family of her own is over – she’s the last living person in her family. And…she was so in love with him doesn’t know what to expect. She gets in the door of his office and the emotion was so intense for me to sit there and feel, that I had to have her ask Seth if they could just talk for a second, ask how each other was doing. She asked for pleasantries just so they could adjust to being together again. She asked because I needed that time…

This is my 100th Harlequin book and it absolutely showcases my writing style. It’s intense emotional fiction all the way. I write deep point of view almost exclusively and these two had ten years worth of intense emotional bottled up. They weren’t shy about spilling it all over me.

That possibility is always there, we just have to be willing to make it a choice. If faced with a ‘no’ look outside that box and see if, in another way, that no can become a yes. That being vulnerable is a sign of strength, not weakness. And that real love doesn’t die – even if people choose to turn their backs on it, the love still quietly lives inside of us.

I’m currently working on a new series, Sierra’s Web, that debuts next year. So far there are four Special Edition stories and three romantic suspense stories in the series.
As for upcoming releases:
7/1/21 Falling for His Suspect – Book 18 in my Where Secrets Are Safe series – Romantic Suspense
101/21 His Christmas Future – The Parent Portal Book 7 – Special Edition
I have seven Harlequin titles scheduled for 2022 as well!

Giveaway: 5 eBook copies of Having Her Soldier’s Baby – book one in the parent portal series.

To enter Giveaway: Please complete the Rafflecopter form and Post a comment to this Q: Where do you plan to go first when we can move about in a normal world?

Excerpt from Their Second-Chance Baby:

Will a blast from her past

Bring her the future she dreamed of?

Lieutenant Annie Morgan is determined to have the family she wants more than anything. But fertility problems mean she must get permission from her JAG attorney ex, Seth, to use their embryos. Annie never stopped loving Seth, but his inability to deal with her dangerous job sabotaged their relationship years ago. Now that they’re realizing the dream of a family, is there any chance they can renew other dreams, as well?

The international author of 100 original novels, in twenty languages, Tara Taylor Quinn is a USA Today bestseller with over seven million copies sold. A five-time RITA finalist Tara appears frequently on bestseller lists, including #1 placement on Amazon lists, and multiple showings on the Publisher’s Weekly Bestseller list. She is a National Reader’s Choice Award winner and has appeared on national and local TV across the country, including CBS Sunday Morning.

« Spotlight & Giveaway: Bodyguard SEAL by Paige Tyler
REVIEW: Before I Saw You by Emily Houghton »