Today it is my pleasure to Welcome author Eliza Knight to HJ!

Hi Eliza and welcome to HJ! We’re so excited to chat with you about your new release, Truly Madly Plaid! 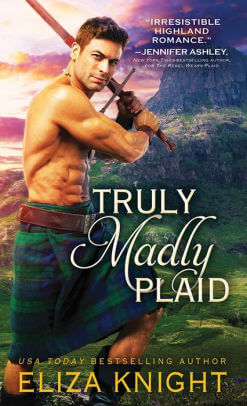 I wanted to say first, thank you so much for having me here! I’m super thrilled for the second book in my Prince Charlie’s Angels series to release – TRULY MADLY PLAID! Each of the books is based loosely on real-life female rebels during the Jacobite Rebellion in Scotland.

Prince Charlie’s Angels (aka my heroines) make a childhood pact to give up everything in the fight to honor their country and reinstate their rightful king. They risk their lives to protect Jacobite soldiers. Hiding them, healing their wounds, and aiding in their escape from enemy forces, puts these fiery ladies in harm’s way, but their loyalty wins out over fear every time.

In book two, Jacobite rebel Annie MacPherson’s world is torn apart when her family’s castle is ravaged by enemy forces. Determined to aid her countrymen, she braves the battlefield and finds gravely wounded Lieutenant Craig MacLean—her brother’s best friend, a man whom she’s been at odds with before—he might just think she’s a wee bit mad. With so much of her world seeming to fall apart around her, Annie focuses on helping to heal MacLean as well as half a dozen other warriors, all while trying to avoid notice of the redcoats who are bent on seeing them buried.

Craig wakes with his wounds stitched and Annie tending him inside a makeshift hospital. They grow close as he heals. Now, it’s time for him to make good on a promise he made to her brother to keep her safe. But the English dragoons are getting closer and closer. If they remain holed up in the tiny cottage, they will all be sitting ducks for the picking. Craig knows they have to escape together if they’ll have any chance to survive, and their plan will have to be spot-on or else how are they going to get all of the wounded to safety?
But then they come face-to-face with the enemy and Craig is imprisoned. Annie will have to decide if she will give up on him, or risk everything she has to save the man she’s come to realize she can’t live without.
I like to say that history and adventure come to life within the pages of these thrilling Scottish Highland romances.

I think I would tell them to look beyond the surface, and dig deeper. For both of them, they have misconstrued ideas of who the other is. And while those notions are based in fact on action and not simply “judging a book by the cover”, they take those first impressions and form in their minds who they think the other is. I had a lot of fun undoing all of that “damage” in this book. Below you’ll find one of my favorite scenes in the book, and it is where my heroine gives the hero his first impression of her.

Icy rain had pelted the earth, threatening to freeze everything into a single slickened crystalized mass, and for now, it had waned at least enough that Lieutenant Craig MacLean felt safe moving out of his tent.
While most of the men were celebrating their victory of the most recent battle, the rest of them were battling the ferocious weather, exhausted and simply looking for a place to get warm.
Craig was of the latter group and trudged toward the house to check on the prince, who’d come down with the ague that had seized a number in his own company. The closer he drew to Bannockburn House, the more certain he was that he could hear someone retching. Dear God, how many more of them were to catch this illness?
Then he saw her, bent almost all the way over, a hand holding her balance on the stone facade of the wall.
Her brow was slick with rain or sweat or both, dark tendrils of hair plastered to her forehead and temples. At his approach she stood up straight, swaying. Her pallor was gray and ghostlike. He stood for a moment watching her, recognizing in an instant who she was. Sister to his friend Graham, Annie MacPherson, the prince’s own healer and a healer to many of the soldiers within camp. Yet it appeared she was the one in need of healing now.
She leaned her back against the stones, stared almost through him, and then turned slowly, pressing her forehead to the cool outer wall. The lass was seriously ill. Craig edged closer.
Och, he’d never seen so much vomit in his life, not even from a drunken soldier. She’d vomited up the entirety of the last meal she’d eaten and perhaps what she’d consumed for the last sennight. Over and over again, so much so he’d begun to think it an unholy thing.
“My lady,” he started, standing only a few feet away now, arm outstretched as though to aid her somehow. She might have been ill as the devil, but he had to help her.
Annie wiped her mouth and then pulled a dagger from her boot, brandishing it toward him with wild eyes. “Get away from me, Sassenach, or I’ll cut off your ballocks and shove them down your throat if ye come another step closer.”
Craig held up his hands in surrender, brows raised nearly to his hairline. Had the illness caused her to be addled? He was clearly no Sassenach. “I only want to help, my lady.”
“I said leave me, ye savage Sassenach bastard. Run back to your butchering friends.” And then she bent over again, convulsing, her body not done tormenting her.
Craig glanced down, wondering what part of his attire—kilt, frockcoat, boots—made her think that he was a Sassenach. He’d yet to bathe after battle, not wanting to freeze to death, and it had been many days since he’d shaved his face, but if anything he just looked more like the rest of the bearded rebel Highlanders.
When Annie was finished retching, she brandished the knife toward him again, swinging it so wildly he feared she’d end up hurting herself. And then she threw it at him. Though he dodged, the tip nicked his lip before falling at his feet. Craig growled at her, the taste of blood on his tongue. Finished with this nonsense, he moved to turn away when she started to sway uncontrollably, stretching for the stone wall, not finding it, and pitching forward.
With her weapon at least discarded, he reached in then, an arm around her back, another beneath her legs, lifting her up into the air. She collapsed against him, weak as a lamb just born and hotter than fire with fever.
Annie struggled meekly. “Put me down. Do ye know who I am?” And then she fell into unconsciousness.
“I know exactly who ye are,” he said to her unaware face. “And your brother would have my head if I left ye here. I’m taking ye inside, lass. Get ye some help.” He carried her to the front door and managed to open it with her in his arms. “Is there someone who can help?” he called. But no one came. “Bloody hell.”
Craig carried her up the stairs and found a spare bedroom, laying her down on the mattress when footsteps sounded behind. He turned around to find a wee maid brandishing another knife in his direction.
“What the bloody devil with so many of ye trying to kill me when I’m only trying to help.” This one looked to have a worse skill with a knife than wee Annie, and she lunged at him, but Craig was able to block her, grabbing her wrist and applying just enough pressure that she dropped the weapon. But then she tried using her fists. “Oh, for bloody hell’s sake.” He held her tight in his arms, staring down into her face.
“What have ye done to my mistress?” she demanded, wrestling against him.
“I was helping her, ye bloody fool. I ought to have ye whipped.”
Her face paled. “Please, I didna realize…”
Craig let her go, and she scrambled backward. “I’m no’ going to hurt ye any more than I was hurting her, ye pair of mad fools. I was only trying to help your mistress, who was outside getting ill against the side of the manor.”
“Oh no, she’s caught the prince’s ague.”
“Aye, and a bit of madness too.” Craig backed away, his thumb brushing at the fresh wound on his lip. “Take care of your mistress. And dinna attack anyone else with the damned blade. Either of ye.”

I want my readers to take away an impression of hope and love. This series is based during a time fraught with violence, and given the massacre of the Battle of Culloden, and knowing that the rebels did not win, it is hard to put a hopeful spin on the tale. But I think I’ve done that. The heroines of each book are based off of real people who survived. Annie is a fictionalized combination of several women: Anne MacKay, Anne Leith and Lady Maxwell. Craig is also fictionalized, though his story is like so many men during the time. My characters are an example of survival, of love and friendship. My hope is that readers will follow their romantic journey, their quest for survival, and be satisfied in the end with the very happily ever after. After all, my favorite thing about a historical romance is the rich history, the drama and adventure, and of course falling in love

These Highland warriors are prepared to give up everything to fight for their country.

Annie MacPherson’s world was torn apart when her family’s castle was ravaged during the war. Determined to aid her countrymen, she braves the battlefield and finds Lieutenant Craig MacLean left for dead. Soon her heart belongs to the fierce warrior.

As the English dragoons draw closer to Annie’s makeshift hospital, Craig knows they have to escape together if they’ll have any chance to survive. But when they come face-to-face with the enemy and Craig is imprisoned, Annie will have to risk everything she has to save the man she can’t live without.

History and adventure come to life in Eliza Knight’s thrilling Scottish Highland romance. Annie is based loosely on Anne MacKay, Anne Leith and Lady Maxwell, who risked their lives to protect Jacobite soldiers by hiding them, healing their wounds, and aiding in their escape from enemy forces.