Today it is my pleasure to Welcome author Eve Gaddy to HJ!

Hi Eve and welcome to HJ! We’re so excited to chat with you about your new release, Under the Mistletoe! 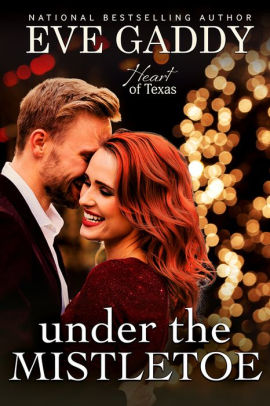 Spencer McBride dates a lot of women, but he’s not a player and he has nothing against marriage. He simply hasn’t found anyone he wants to spend his life with. But then he meets Georgie Durant, literally under the mistletoe, and does she wow him. Too bad she won’t date coworkers. Spencer’s a firefighter paramedic and Georgie’s a paramedic. Doomed from the start in her opinion.

It takes him a while but Spencer is nothing if not determined. Throughout the Christmas season he woos her and Georgie has no defense against a man who volunteers for any good cause and is someone everyone–friends, family, older people, women and children–can depend on. And damn, does he have to be so sexy to boot?

Spencer makes me want to hug him. He can be a smart ass–because all the men I write about are to some degree. (Yes, I live with and around smart asses.) But he has the proverbial heart of gold.

Georgie is gun shy. And her ex isn’t a bad guy, he just wasn’t able to commit like she wanted. But it left her wary of workplace romances since she worked with him for quite a while. Spencer, though, is really hard for her to resist.

The main thing that surprised me and will probably surprise my regular readers, is how long it took Spencer and Georgie to get to the (yes, the only) love scene. But that’s what worked for this book. And it was a lot of fun to write.

This shows their initial meeting–later that night. I think it shows a little of their banter.

“Hi. Why do we keep running into each other?” Georgie asked.
“Probably because I’ve been looking for you. You realize you’ve done it again, right?”
“Done it again?”
He cast his eyes upward. “You should be more careful. All men aren’t as understanding as I am,” he added modestly.
She looked up too, and frowned. “Oh, for—I can’t go around looking up every time I stop to talk or to glance around a room.”
“I suppose not. But you do seem to have a knack for the mistletoe.”
“Entirely accidental. I’ve never been to a party with mistletoe coming out the yin-yang.”
Spencer laughed. “Great description. How about we shake hands again? Unless you’ve changed your mind?” he added, knowing she hadn’t.
“You’re very persistent, aren’t you?”
“You say that like it’s a problem.” Solemnly, he held out his hand.

I want them to enjoy a feel-good, happy romance without a ton of angst. I want them to laugh a little at the town and the characters and sigh a little over the romance and love of the Christmas season.

I’m working on the fourth and last book of my Heart of Texas series. Heart of the Texas Warrior is Jessie McBride’s and Asher Chapman’s book. Asher is a wounded veteran, the brother of the hero in my most recent Whiskey River book, No Ordinary Texas Billionaire.

After that I have a three book series (so far) set in Whiskey River. The Texas True series follows the stories of some of the secondary characters from my other Whiskey River books and the heroes are the Walker brothers. Gabe Walker, the hero of the first book, is mentioned in a number of other books in both my Whiskey River and Last Stand series. He’s the metal artist/sculptor and his heroine is Chantel Chandler, one of the sisters who own the Fallen Angel’s lingerie shop in Whiskey River.

Giveaway: Tule swag and ebook of Under the Mistletoe

Excerpt from Under the Mistletoe:

Georgie glanced around the room. In many ways Valencia’s looked like a number of Mexican food places where she’d eaten in the past. The restaurant was in an adobe building, which according to the history written on the back of the menu was a hundred years old. Obviously, it had been kept in good shape all those years. On the walls were large round discs of gold and black, of an Aztec-looking pattern. Colorful sombreros also hung on the wall. One wall was brick with large windows, and in one corner of the main room was an adobe fireplace. There were tables scattered around the center of the room, and carved wood booths with brown leather seats along the edges. The wall at one end of their booth was lined with colorful Mexican tile, with a copper coating below it. “This tile is beautiful,” Georgie said, looking at the patterned mix of bright colors. “Do you suppose it came from Mexico?”
“Nope, it’s Valencia tile, made in the USA. One branch of the family owns the restaurant, the other manufactures tile. I went to high school with Esteban Valencia, the owner of the restaurant. You’ll meet him later. Elena, Esteban’s cousin who you just met, comes from the Valencia tile side of the family but she manages the restaurant.”
“So it really is a family affair.”
“Oh, yeah. Pretty much everyone who works here is some kind of family connection. Even down to the kids who bus the tables and bring chips to the dishwashers, busboys, and servers. Esteban is the eldest of six. Several of the older kids are also involved with the restaurant in some manner. And speaking of Esteban,” Spencer said with a grin, “here he comes now.”
Spencer stood and exchanged handshakes and back slaps with a man who was frankly gorgeous. Black hair, unexpectedly blue eyes and a blinding smile almost knocked her over when he turned to greet her. Spencer introduced them and Esteban held out a hand. “Welcome to Last Stand, Georgie. How are you liking the town?”
His voice was deep and almost hypnotic. Since they’d been friends in high school, she assumed he and Spencer were about the same age. Belatedly realizing she’d been staring at him without answering his question she responded. “I like it a lot. Your restaurant is lovely.”
“Thank you. So are you.”
She nearly blushed. “Thank you.” Damn, the man oozed charm. She glanced at Spencer, who looked resigned.
The two men spoke for a short while and Esteban left, after telling them the queso was on the house.
“He’s very…nice,” she said, rather lamely.
Spencer laughed. “I’ve been watching Esteban’s effect on women since high school. No, he’s not married, and yes, he’s a good guy, and yes, he’s most definitely a player.”
“I didn’t ask.”
“You wanted to.”
Unable to deny it, she laughed. “I take it that’s a common reaction.”
“Yeah. I like him anyway.”
“Poor baby. You’re hardly one to talk.” Spencer might not be quite as jaw-droppingly gorgeous as Esteban but she knew he had his fair share of female admirers. She’d already heard them speculating about who he was going to date next and wondering when he was going to settle down like his brothers had. The consensus on that seemed to be not anytime soon.
Unabashed, Spencer grinned. “I try but I run a poor second.”
Their food came and as promised, the queso was extraordinary and the rest of the food was delicious as well. They sat talking after dinner since unlike many Mexican restaurants Valencia’s was fairly quiet. The more Georgie was around Spencer the more she relaxed. The more she liked him. Tread carefully, she told herself. Spencer had a dangerous charm of his own. She’d realized that from the moment they met, under the mistletoe at the Corbyns’ party. Remember that, Georgie. Charming men are your downfall.
If only she didn’t remember that kiss almost every time she looked at him, or feel that frisson of sexual awareness whenever they touched, being careful would have been a lot easier.

Can a kiss under the mistletoe be the beginning of a beautiful relationship?

Firefighter and paramedic Spencer McBride has never been tempted to change his happy-go-lucky bachelor status – until he literally runs into cute newcomer Georgie under the mistletoe.

Wounded after giving her heart to a man who wouldn’t commit, paramedic Georgie Durant has come to Last Stand, Texas, for a fresh start. Though tempted by the handsome Spencer, she’s too leery of his easy charm and the pitfalls of a workplace relationship to risk one with him.

But as they spend more time together amid the Christmas gaiety and Georgie sees Spencer’s dedication and devotion to the people he helps, she begins to wonder if this beguiling co-worker could be different.

Spencer has always been a man who knows what he wants – and he wants Georgie. But when the man from her past comes to town, determined to win her back, can Spencer convince Georgie to take another chance – with him?

Eve Gaddy is the national bestselling, award winning author of more than twenty-five novels. A member of Romance Writers of America’s Honor Roll for Bestselling authors, her books have won and been nominated for awards from Romantic Times, Golden Quill, Bookseller’s Best, Holt Medallion, Daphne Du Maurier and more. She was nominated for a Romantic Times Career Achievement Award for Innovative Series romance and won the 2008 Romantic Times Career Achievement award for Series Storyteller of the year. Eve’s books have sold over a million copies worldwide and been published in many foreign countries. Eve lives in East Texas with her husband of many years.
Website | Facebook | Twitter | Instagram | GoodReads |

« REVIEW: The Outlaw’s Heart by Amy Sandas
REVIEW: A Mistletoe Kiss for the Single Dad by Traci Douglass »

29 Responses to “Spotlight & Giveaway: Under the Mistletoe by Eve Gaddy”