Hi Juno and welcome to HJ! We’re so excited to chat with you about your new release, Until the End! 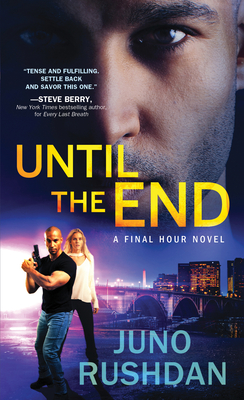 This is an opposites attract, boy needs girl to stop an imminent attack, girl needs boy to survive, romantic thriller. Readers of this series have been waiting for this book because we finally get to understand Castle Kinkade, a hardnosed operative who will do anything for national security—until he meets his greatest challenge, Kit Westcott. There’s also a twist at the end that you won’t see coming.

Wow, besides readers being entertained, I want them to escape from home with this book. To have an exhilarating adventure where they’ll root for the hero and heroine until the end.

Giveaway: A paperback copy of Until the End by Juno Rushdan

To enter Giveaway: Please complete the Rafflecopter form and Post a comment to this Q: Both the hero and heroine struggle with their sense of purpose and feeling like they belong? What gives you a sense of purpose?

He’s strong. Fierce. Relentless. And he may be her only chance of surviving the night.

Gray Box operative Castle Kinkade always gets the job done, no matter how tough the assignment. But when he agrees to protect white-hat hacker Kit Westcott, Castle’s loyalty is tested like never before. Trapped in the closest of quarters, protective instincts flaring, he can feel the ice surrounding his heart melt…and he knows he’d do anything to keep Kit safe.

Even defy the rules that shaped his life.

Castle is the last person Kit should confide in, let alone be attracted to, but he’s the only ally she has left. Under threat of imminent attack—and a chilling conspiracy that hits too close to home—Castle and Kit are forced to put their hearts and lives on the line…and stop at nothing to face the greatest danger the world has ever known.

Juno Rushdan draws from real-life inspiration as a former U.S. Air Force Intelligence Officer to craft sizzling romantic thrillers. Although she is a native New Yorker, wanderlust has taken her across the globe. She’s visited more than twenty different countries and has lived in England and Germany. When she’s not writing, Juno loves spending time with her family. She currently resides in Virginia.
Website |

29 Responses to “Spotlight & Giveaway: Until the End by Juno Rushdan”