Hi Michelle and welcome to HJ! We’re so excited to chat with you about your new release, Wedding Season!

Thanks so much for having me. 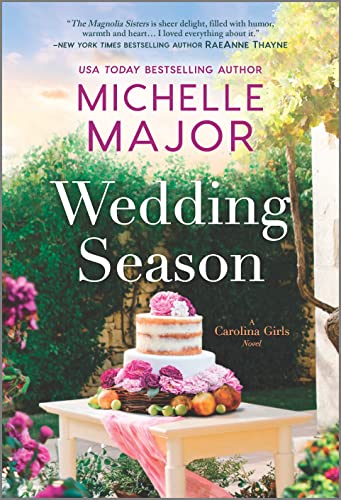 Mariella Jacob and Alex Ralsten are sworn enemies but when they end up working together in the quaint town of Magnolia, North Carolina, something shocking happens—they form a connection that startles them both…daring them to admit that a rocky past might lead to something unexpectedly wonderful.

“It wasn’t you that I doubted,” she told him, figuring if there was a time for honesty, that time was now. “I have all the faith in the world in you, Alex. Not so much in myself.”
“Can my faith in you be enough?” he asked.
She thought about that, wondered if it could be true. “I wanted to come to you whole.”
“Oh, sweetheart, none of us is completely whole at this point. Don’t you see?” He placed a hand on either side of her face, the warmth of him heating some of the icy places inside her. “My broken pieces fit with yours. We’re only whole together, Mariella. We’re better together.”

Mariella and Alex fight their attraction, but it’s the introduction of her teenage daughter – and the vulnerability Mariella can’t hide – that first shows Alex a different side to the tough, snarky woman who challenges him at every turn. Alex is a really good guy – which is scary as heck for Mariella and it’s his acceptance of her (flaws and all) that convinces her to let down her guard.

After her daughter, Heather, is injured, Mariella starts to get close to the teen. But when Heather’s adoptive parents arrive in town, Mariella makes herself scarce. There’s a scene with her and Alex when he comes to her house – she is raw and emotional the way moms often can but doesn’t feel like she can show it. I loved how he could support her without trying to change her.

“You’re really taking this laying low seriously,” he told her.
“I promised Heather. Have you met her parents?”
He nodded. “They’re nice people who clearly adore her. She has a great family, Mariella. Her dad went back this morning, but her mom is staying through the weekend. I think she’s happy for an excuse to fuss over her daughter. The way they make it sound, she’s always been fiercely independent and self-sufficient.”
“Which probably comes from being abandoned as a baby. My fault.”
Mariella’s voice sounded hollow, and he wanted to pull her close. Instead, he took the containers out of the carryout bag to keep busy. “Self-sufficient isn’t a bad thing. And you didn’t abandon her. You put her up for adoption and she was chosen by a great family.”
“It’s what I wanted for her.”
“Are you going to hide out in your house until the weekend?”
“The plan was to lay low for a couple of days. If her mom is now staying until the weekend, then I’m keeping the curtains drawn.”
“Do you think that’s a little excessive? You could go for a walk around the neighborhood to get some fresh air.” He reached out and patted the top of her head. “Potentially shower?”
“Yeah, yeah, point taken. I’ve been… Well…it’s been a rough couple of days to be honest.”
“Tell me about it,” he said, truly wanting to know. To understand what made this fascinating woman—with her dichotomy of edges and vulnerability—tick.
“You know she spent the night here.”
“I do.”
“I barely slept a minute. I laid in bed all night listening in case she called out to me. As if she were still a toddler.” She started to run a hand through her hair then cringed when her finger immediately got tangled in it. “It was ridiculous but not as absurd as the fact that last night I slept in the guest bedroom.”
“Why did you sleep there?”
“When I gave her up, I did my best to set aside any attachment I had to the person she would become. Sometimes my mind would try to imagine her as a child. Birthdays—April thirteenth by the way—were particularly difficult. I would pay attention to other girls who seemed to be around her age. I wanted to imagine my daughter growing up.”
She rolled her shoulders like that would displace some of the tension she clearly carried there. “Drinking helped me not to think about her. The drugs and the booze enabled me to tamp down my curiosity. Then the business got bigger and my life got busier. I managed to tamp down thoughts of her, which made me feel even worse. What kind of a mother could let her child slip from her heart?”
“I don’t believe you did that.” Unable to resist any longer, Alex reached out and drew her to him. He expected her to fight him, but she came willingly. A testament to how much she was struggling right now that she wouldn’t rebuff the comfort he offered.
She didn’t exactly sink into him but rested her head on his chest. He drew circles on her back with the palm of his hand, hoping to help her feel better.
“You’re right,” she said against his shirt. “It took more work and more drinking and more…of everything to keep myself shut off from thoughts of her. When I came to Magnolia and I didn’t have any of those crutches, regret and what-ifs ran me over like a freight train. But you know what happened?”
“What’s that?”
“I made peace with them. Not with what I had done or my guilt over giving her up. Instead, I allowed myself to imagine who she would have become.”
She pulled away and looked up at him. “Then she was here and more amazing than I could have imagined. I have no right to want a relationship with her, but I want it with every fiber of my being. So I’m going to hide out here with the curtains drawn unless the store catches fire or zombie apocalypse rains down on us.”
“At this point, nothing would surprise me.”
Mariella laughed before turning serious again. “As much as Heather wants to keep me a secret from her mom, I don’t think I can handle seeing the woman who raised my daughter. I owe her and part of me hates her because she succeeded where I failed. She’s a living reminder that I’m a failure. I hate myself for it.”
“No.” He cupped her face between his hands. “Don’t say that. You chose what you believed to be the best option for your baby. You can’t hate yourself for a decision you made from a place of pure love.”
She seemed to consider that for a moment. “You make more sense than I’d like to admit.”
“I’m brilliant,” he told her. “One hundred percent genius.”

For me, there’s so much hope and renewal in spring. It’s like the whole world is waking up and ready to show off a bit. Wedding Season is definitely a story of hope and two people who have to overcome a lot from their past. My intention is that it leaves readers feeling all warm and fuzzy on the inside and a little more positive about life in general.

I have a few more releases for 2022. In June, A Starlight Summer, the next book in my Welcome to Starlight series, releases. Then in October, readers will head back to Magnolia for the next Carolina Girls book, The Wish List. I’ll have one more holiday release with Special Edition. Right now, I’m working on the January Fortunes of Texas book – lots of books from me in the future!

Giveaway: I’d love to give away 3 Signed copies of Wedding Season to readers (US only).

To enter Giveaway: Please complete the Rafflecopter form and Post a comment to this Q: What is your favorite wedding tradition? Mine is “something old, something new” because I love seeing the creativity of what people choose. For my wedding over 20 years ago, I wore my grandmother’s long gloves – my something old.

Mariella Jacob was one of the world’s premier bridal designers, but one viral PR disaster later, she’s trying to get her torpedoed career back on track in small-town Magnolia, North Carolina. With a secondhand store and a new business venture helping her friends turn the Wildflower Inn into a wedding venue, Mariella is finally putting at least one mistake behind her. Until that mistake—in the glowering, handsome form of Alex Ralsten—moves to Magnolia too.

Mariella ruined Alex’s wedding by announcing that his starlet bride-to-be was sleeping with Mariella’s fiancé. While he’s furious when they’re forced to work together, there’s no denying Mariella is hardworking, talented…and gorgeous. In fact, though Alex keeps reminding himself that they’re enemies, something deeper is growing…daring them to admit that a rocky past might lead to something unexpectedly wonderful.
Book Links: Amazon | B&N | iTunes | kobo | Google |

Michelle Major is the Publishers Weekly best-selling, RITA award winning author of over thirty sexy and sweet contemporary romances. She loves second-chances love stories, smart heroines and strong heroes. A Midwesterner at heart, she’s made the Rocky Mountains her home for nearly half her life and is thrilled to share her books with readers. Connect with her at www.michellemajor.com.
Website | Facebook | Twitter | Instagram | GoodReads |