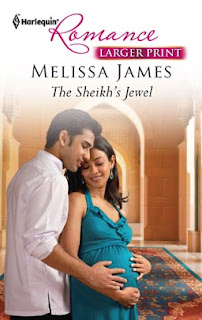 The Sheikh’s Jewel by Melissa James
My rating: 4 of 5 stars

Book Blurb:
When Amber’s betrothed was killed and the future of two desert nations hung in the balance, she had no choice—she had to marry her fiancé’s brother and heir, brooding Sheikh Harun El-Kanar.

For three years, Amber has struggled to make her marriage work. Harun may be devastatingly sexy, but he’s closed-off—burdened with grief and the responsibilities of ruling a troubled nation.
Now they’ve both been kidnapped. Is this Amber’s last chance to show Harun that she could be more than just his paper wife—perhaps even the jewel in his crown

My Review:
I’m not sure where to begin…there were so many different layers to this book – a troubled marriage, loss of family, kidnapping, war, family re-unions, wedding and babies!

Harun and Amber’s story was uniquely different, Amber was betrothed to marry Harun’s older brother Fadi; when he was killed in an accident, she had no choice but to marry her fiancé’s younger brother Harun when the middle brother Alim up and took off. Complicated much? 🙂

Amber’s character was well written, considering everything she put up with she had spunk, courage and a kind heart. Harun is no alpha hero, he is emotionally tortured and constantly second guessing his worth….. Harun and Amber spent more time apart than together in this book, I truly wanted to smack Harun a couple of times as I read along, seriously who ignores his wife for 3 years while living in the same palace???!!!

About fifty pages into this book, I realized that this book was a sequel to ‘The Sheikh’s Destiny’ and that was when It all fell into place and started making sense to me.

Melissa James writes beautifully, this story is complex, if you stick with it – It is worth the read.

Quotes from the book

« Married by Monday by Catherine Bybee
The Tycoon’s Secret Daughter by Susan Meier »
Comments are closed.