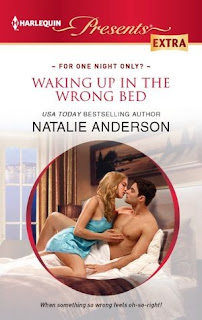 Waking Up in the Wrong Bed by Natalie Anderson
My rating: 5 of 5 stars

Back Cover:
When film location scout Ellie Summers sneaks into a colleague’s hotel room with seduction in mind, she’s thrilled by her own daring!
But the smug morning-after glow morphs into red-faced mortification when she wakes in the arms of a total stranger! Ruben Theroux might be fine with the situation, but a flustered Ellie most definitely is not.
Ellie’s only defence against this very attractive guy is to insist they’re friends only—strictly no benefits! But Ruben isn’t a successful businessman for nothing—they’ll be good together, and he’s happy to play dirty to get what he wants.…

My Review:
Walking Up In the Wrong bed is fun, flirty, sensual, and wickedly HOT!!!

Ruben Theroux is a sexy incorrigible flirt and Ellie is one lucky girl to be on the receiving end of all that sexy hotness…just saying!

Natalie Anderson has outdone herself, I totally digg this book! There’s one scene in this book in front of the window at the cabin…. I’m not gonna give it away, suffice to say it’s stick your head in the freezer HOT!!!

Walking Up In the Wrong bed is a fact paced modern romance, with great characters and witty dialogue…irresistible delicious!!! highly recommended!

[Ellie Summers has just made a *massive* mistake. Huge. So big even she can’t believe it. And oh boy has  she been backpedalling her way out of there. Trouble is, the guy she might have accidentally jumped thinks the whole thing is a lark–and he wants to play some more. Ellie is far too mortified for that… except the guy? He’s just that bit too gorgeous!!! And despite everything that’s happened between them already, they’ve yet to actually kiss…]
She paused by her open driver door and met the look in his delicious eyes. “Right now I don’t have any regrets. I stay and I might get them. I don’t want to have any.”
“What about what I want? What about my regrets?”
“I can only apologise. Again.”
He walked closer, taking hold of the door. “Never feel you have to apologise to me. Never ever.” 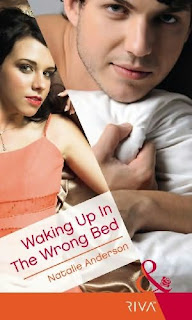 Unable to answer that, she got in the car. She’d not been honest about her lack of regrets. She regretted nothing of what had happened, but for what else could have happened had they been different people with desires that converged.
He closed the door for her but remained right by the car, expectantly. She hit the button to wind the window all the way down. He bent and leaned in so his face was right near hers.
“You don’t get away that easy,” he murmured, sliding his hand to her jaw.
She couldn’t accelerate away or she’d take his arm – and head – with her. But there was no mistaking his intention.
The smile said it all and those gorgeously curved lips arrowed in on hers. The touch was firm – but not totally dominant as she’d expected. No, he held back for all of a second or two. But then his hand cupped her head, angling her slightly better to meet his as his lips plundered hers. And in another instant she plundered right back – seeking more of that strong touch, that deliciousness – the full impact of his utter masculinity. The shivers skittered down her spine, the knots coiled tighter and tighter in her belly already. His tongue swept – playful, insistent, driving. How could so much could be said with a kiss?
She had no idea why she was gripping the steering wheel so tightly, or why she had her foot pushed so hard on the brake. The car engine wasn’t even running. But she just knew she was in danger.
He stepped back. Her gaze was glued to him – to the fit, taut body and the smile that held as much rue as it did tease now. His big eyes burned right through hers.
“My regret…” he nodded slowly. “…was not kissing you. Of course now I regret not kissing you sooner.”
Breathless, she put her hand on his wrist, seeking one last touch of skin. “Thank you for being so nice to me.”
His gaze narrowed. “I’m not as nice as all that Ellie.” His voice dropped so she leaned forward in her seat, nearer to hear him. “You need to know something about me.”
She waited, lungs not breathing, heart not beating.
“I’m man enough to take no for an answer,” he said. “But I’m also man enough to fight for what I want.”
Eyes not blinking, she had to ask. “What do you want?”
“You again. Every way. Any way.”
Oh.

He broke the drilling intensity with one of those shattering smiles that gave him such an unfair advantage. “So if you want to go, you’d better go now.”