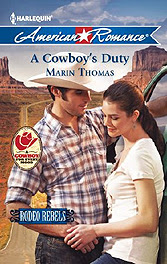 A Cowboy’s Duty by Marin Thomas
My rating: 4 of 5 stars

Back Cover:
That’s what Dixie Cash learned from her mother. That and fathers don’t stick around. She’s pretty independent, and doesn’t need help from her baby’s daddy, sexy rodeo rider and ex-soldier Gavin Tucker. But he seems determined to do right by her. Just as Dixie starts to imagine that together they might be a family, tragedy strikes—and Gavin shows his true colors. She knew he wasn’t honorable!

After what Gavin went through in Afghanistan, he was more than happy to lose himself in the rodeo circuit—and in sweet Dixie’s arms. But doing the right thing can be hard sometimes, and when Dixie—Gavin’s lifeline—doesn’t need him anymore, he’s at a loss. His heart still longs for her, though he’s not sure he deserves a second chance.…

My Review:
When Dixie and Gavin’s one night of passion results in a pregnancy it sure throws their well ordered life into a tailspin.

Ex-soldier Gavin is dealing with PTSD and is happy to loose himself touring the Rodeo circuit; he is a rolling stone not looking for either a relationship or commitment, a baby on the way sure changes things. Dixie is a little spitfire who is fiercely independent and is not interested in being a responsibility to anyone.

Clearly Dixie and Gavin have a tough road to negotiate to reach their HEA; I really like how this couple works through their issues and put their baby’s wants and need before their own.

Dixie lives on her family Pecan farm with her six older brothers. The Cash family dynamics is very well written, all the teasing, the ribbing between the siblings is fun to read, but their protectiveness and love for Dixie will warm your heart.

A Cowboy’s Duty is a nice easy read, with down to earth characters; a story about family and love and sticking by each other through thick and thin no matter what hand life deals you.

“I’ll never be as ready as you are.” Dixie Cash grimaced at her high-school friend Shannon Douglas—one of the top female bull riders in the country.

Shannon was forever on the lookout for a roughstock competition and when Five Star Rodeos had agreed to sponsor women’s bull riding in three summer events Shannon had promised to find five women crazy enough to ride with her—Dixie being one of them.

“I feel bad taking your money.” Dixie shoved the check into the front pocket of her jeans.

“You’re worth every penny.”

When Shannon had mentioned the rodeos, Dixie had just been hired as a part-time receptionist for a construction company in Yuma. She’d wanted to help her friend but needed money to launch an Internet business for her homemade organic bath soaps. Then Shannon had made Dixie an offer she couldn’t refuse—a thousand dollars per rodeo—tax free.

“Looks like Veronica Patriot set her sights on Gavin Tucker.”

“The bull’s more of a spinner than a bucker,” Shannon said. “Stay centered.” The tan Charbray stood docile in the chute, but once freed all hell would break loose.

“Ladies and gentlemen, turn your attention to gate two. Dixie Cash is about to tangle with Bad Mamajamma.” The crowd stomped their boots against the bleachers and whistles filled the air.

While Shannon and a rodeo helper fished the bull rope beneath Bad Mamajamma, Dixie pulled on her riding gloves and adjusted her headgear with its protective mask.

Let’s get this over with. Dixie straddled the fifteen-hundred pound nuisance, found her grip then nodded to the gateman. The bull pounced for freedom, the first buck almost unseating Dixie. Anticipating a wild ride, she held her breath through the first of two tight spins, squeezing her thighs against the animal’s girth.

Bad Mamajamma decided he’d had enough of Dixie and kicked out with extra force. As if she’d been shot from a cannon, Dixie catapulted through the air. She hit the dirt hard, but instinctively curled her body into a ball and rolled away from the bull’s hooves. The bullfighter stepped in front of Bad Mamajamma, affording Dixie an extra second to gain her footing. She ran for the rails and scrambled to safety.

Try being the operative word. “Thanks.” Brilliant, Dixie. A cowboy with killer looks and nice manners goes out of his way to talk to you and you mumble ‘thanks’?

“How long have you been riding bulls?” Gavin asked.

More like crazy. For the life of her, Dixie couldn’t find her tongue. Turned out she didn’t have to. Veronica Patriot materialized out of nowhere and sashayed her way between Dixie and Gavin. She placed her French-manicured talons on Gavin’s chest and thrust her heaving bosom in his face. “Time to celebrate, cowboy.”

Dixie despised Veronica. The woman had done a number on her brother Porter—used him to make another cowboy jealous then left him high and dry with a broken heart.

“What plans?” Veronica propped her hands on her hips.

Dixie had read her share of silent help me messages from her brothers. The look Gavin sent her begged her to rescue him from the clutches of the evil buckle bunny. What the heck.

“Gavin and I have a date,” Dixie said.

“That’s right.” Gavin inched closer to Dixie and the scent of dust and faded cologne went straight to her head. When he rested his arm across her shoulders a little shiver raced down her spine. Gavin couldn’t have been more than six feet tall, but her five-foot-six inches fit perfectly tucked against him.

Veronica’s gaze bounced between Gavin and Dixie. “What kind of date?”

“Honey, a girl like you can’t handle a military man.”

Dixie had heard that Gavin Tucker had been stationed in Afghanistan before he’d left the Army. “What do you think, Gavin? Can I handle you?”

Disgusted, Veronica snorted like a pig and stomped off.

“Thanks.” Gavin released Dixie and stepped back.

Wishing he still had his arm around her, she said, “No worries. Veronica can be a pest.”

“Are you celebrating later with your lady bull rider friends?”

“I’m heading over to the Spittoon. Maybe I’ll see you there.”

Gavin walk off and Dixie couldn’t help but think he was exactly the kind of man she’d like to marry someday.

3 Responses to “A Cowboy’s Duty by Marin Thomas”