Today it is my pleasure to Welcome romance author Regina Kyle to HJ!

Today, Regina Kyle will be unleashing edits from her book Triple Threat 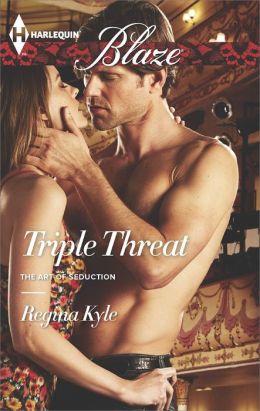 Holly Nelson’s fresh off a disastrous marriage and divorce, and she’s looking for success on the Broadway stage as a playwright. But she doesn’t count on Nick Damone, her high school crush turned action film star, as the leading man in her play – and maybe her life, if she’ll let him in.

Nick’s looking for a fresh start on Broadway, too, in a serious role that’s far removed from the mindless film roles he’s been playing. He’s happy to be reunited with Holly and anxious to explore the lust blazing between them. But their chance at a future is threatened when life-threatening accidents plague the production.

Nick Damone’s a mega hot mega movie star who wants to get back to his theatrical roots and some serious, dramatic roles (think Joe Manganiello). Little does he know that his high school crush, sweet brainiac Holly Nelson, is waiting for him in the wings. The playwright of Nick’s new stage vehicle, she harbored feelings for him way back then, too. But they’re both hiding secrets that they’ll have to reveal – and overcome – if they’re going to be together.

As originally written, Triple Threat had a prologue that flashed back 15 years to Nick and Holly’s first kiss as high school students. While it was a painful decision, my editor and I ultimately agreed that the information in the flashback could be conveyed as effectively by sprinkling it throughout the manuscript, making the prologue unnecessary. But I think this little snippet of Nick and Holly as high schoolers is a ton of fun, so I kept it lurking in my Triple Threat folder, hoping I’d get the chance to trot it out some day.

The Playwright: It’s emerging playwright Holly Nelson’s big break. Broadway. Having survived her traumatic marriage and divorce, Holly is now aiming for success, not love. And any naughty dreams about Nick Damone—the gorgeously dishy star who was her crush back in high school—must remain a fantasy.

The Star: For Nick, Broadway is a chance to go from big-screen-eye-candy to serious actor, and to explore the lust blazing between him and Holly. But life-threatening accidents will force a chain of events that could bring down the curtain on the whole production…or give Nick and Holly a chance to finish the sexy something that started fifteen years ago!
Book Links:

Regina Kyle knew she was destined to be an author when she won a writing contest at age ten with a touching tale about a squirrel and a nut pie. By day, she writes dry legal briefs, representing the state in criminal appeals. At night, she writes steamy romance with heart and humor.

A lover of all things theatrical, Regina lives on the Connecticut coast with her husband, teenaged daughter and two melodramatic cats. When she’s not writing, she’s most likely singing, reading, cooking or watching bad reality television. She’s a member of Romance Writers of America and published author liason for her local RWA chapter.
Website | Facebook | Twitter |

Giveaway: One commenter will receive their choice of an e-book of Triple Threat from their preferred on line retailed or a signed paperback. (US only for the paperback, please).

To enter Giveaway: Please post a comment to this Q: Do you remember your first kiss? What one word would you use to describe it?

Please note: This contest will close on Friday Jan 30th, 2015 at 8:59 PM (PT) and the winner(s) will be notified via email and on this Post. Winner(s) will have 48 hours to respond to the e-mail before a new winner is selected. All entrants must adhere to HJ’s official giveaway policy.

« REVIEW: Innocent in His Diamonds by Maya Blake
REVIEW: Meet Me In Scotland by Patience Griffin »