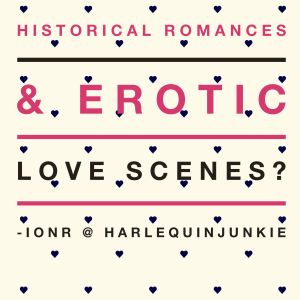 I will make a confession and announce that I am devoted reader to historical-romance novels. I find there is something imaginary, desirable about a rogue, a duke, a pirate or even a knight that is highly appealing. In fact if you were to explore my upstairs library (two guest rooms combined) it would be easy to define which genre is my favorite, historical-romance. From dancing on ballroom floors, to mighty steeds and let’s not forget a fairy tale ending there is something in this genre that demands to be read. Yet, lately I have discovered a new trend among historical authors and that is adding erotic love scenes to many of these eras.

So it’s time for you guys to tell us what you think because you know we love reading your thoughts.