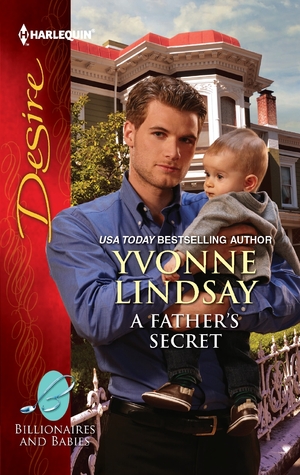 A Father’s Secret by Yvonne Lindsay

There’d been a mistake at the fertility clinic. Now widow Erin Connell has to face the possibility that her baby son is not her husband’s child. And worse, that Connell Lodge, her son’s legacy and the only real home she’s ever known, may be lost to them both.

But billionaire Sam Thornton’s arrival at her bed-and-breakfast changes everything. Erin is stunned by the ferocity of her sudden attraction. Sam, too, is thunderstruck…and tormented. He’s come here for one reason only, and falling for the pretty owner isn’t it. He’s not leaving without her son—his son….

A Father’s story is a well written emotional minefield…fast paced and gripping to the end.

Erin and her husband won the IVF lottery, thus enabling them to have baby Riley. Recently widowed Erin is barely managing to put her life back together when she gets a notice advising her that there was a mix-up at the fertility clinic and that Baby Riley might not be her husband’s James son.

When Sam Thornton arrives at Erin’s bed-and-breakfast the attraction to each other is instantaneous and mutual, though they both try to ignore it given their circumstances. Both are recently widowed; add to that fact that Sam is visiting under false pretense while keeping a secret from Erin the fact that he is Party A and Riley’s father.

Sam has his own cross to bear, he was driving the car that crashed and killed his wife, so when he learns that he might have fathered a baby hope flares eternally and he is ready to fight for his rights, what he doesn’t count on is falling for Erin, the baby’s mother.

Sam’s and Erin relationship built on lies and mistrust is complicated enough without the numerous twist and turns to this story that throw their romance into a tailspin and has the reader wringing their hands, pulling their hair and getting emotionally vested in Erin.

Yvonne Lindsay you are a mean one, I couldn’t believe everything you put Erin through, OMG but this book is surely better off for it.

If you are looking for a book full of angst and drama that will put you through the emotional wringer and keep you at the edge of your seat, then look no further than A Father’s Secret.

« Review: Lean On Me by HelenKay Dimon
Review: Whatever the Price by Jules Bennett »
Comments are closed.