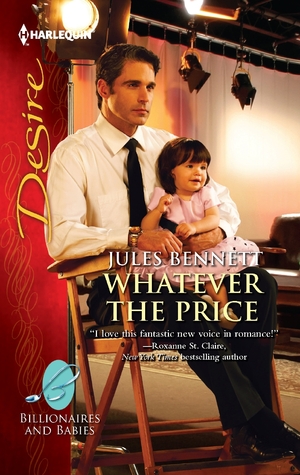 Whatever the Price by Jules Bennett

As Hollywood’s hottest director, Anthony Price is used to getting what he wants. But life hands him a brand-new script when he gains custody of his orphaned niece. Now he needs his wife more than ever—only, Charlotte moved out three months ago. To win her back, he just has to prove he’s ready to put family before his career.

Charlotte doesn’t know if sudden fatherhood will change Anthony’s priorities, but she can’t turn her back on an innocent baby—or the husband she still desires. Is a happy ending too much to hope for?

Whatever the Price is a heart wrenchingly beautiful and passionate re-union story.

Anthony Price is a big time Hollywood director who is so focused on his work and being the best that he literally took his wife Charlotte for granted which lead to the breakup of their marriage.

When Anthony’s niece is orphaned and he is named guardian he request Charlotte’s help to get full legal custody of Lily. Anthony looks on this opportunity as a second chance; he knows he has made some terrible mistakes where charlotte is concerned and he has every intention of putting his marriage first, learning from his past mistakes and doing whatever it takes to have Charlotte back in his life.

Charlotte and Anthony were really well written characters, It was refreshing to have a hero who says “I Love You’ before the end of the book and do so repeatedly. I liked the push-n-pull between the H/h, the author took the reader on a truly heartfelt and romantic journey.

I love a good re-union story and this book delivered on every one of my requirements. I would definitely recommend this book.