An Heir for the World’s Richest Man by Maya Blake is a sensual, passionate workplace romance. 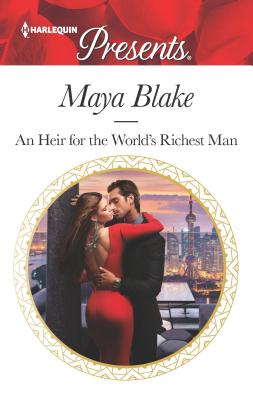 Saffron Everhart has worked for Brazilian multi billionaire Joao Oliviera long enough to know that he doesn’t mix business with pleasure. Oh, except for that one time, when, celebrating a sought after business deal in Morocco, the emotional euphoria led to a fantastic night of sex between her and her boss. But after that? Crickets. It’s like it never happened. And so Saffron has decided that there is no sense hoping for a repeat and she’s giving him her notice.

Joao can’t believe that Saffron wants to leave him! She’s the perfect assistant, and he thought they’d put that ‘incident’ behind them, even if it’s taken a lot of willpower to forget that night on his part. He makes a deal with Saffron to stay for a few more months to complete a business transaction where he needs her expertise, and in return he won’t stop her from getting another job. But when he finds out she’s pregnant, with his twins? All bets are off. He wants to be part of the children’s lives but can Saffron convince him that together they could find their own happy ending?

I really enjoyed this workplace romance! Saffron and Joao have a lot of chemistry, and now that Saffron has an end date to work with Joao, the attraction they’ve been trying to keep hidden keeps springing to the surface resulting in more sensual episodes (though on Joao’s part, no hint that it means anything more than a lapse in judgment, at least at first). There are a variety of settings in this story including a trip to Joao’s home country of Brazil, and Joao’s immense wealth means luxury hotels, excesses, and amenities only known to the very rich. But while he may at first appear cold and only interested in business, he’s hiding a tragic childhood upbringing, and Saffron soon learns about the philanthropic efforts he is involved in. It makes him more of a well rounded individual and it was good to see him using his money to help others.

One of Saffron’s dreams is to be a mother and have a family and realizing that would never happen as long as she worked with Joao is what led her to be determined to walk away. But the discovery of the twins changes everything. She knows Joao isn’t going to abandon his sons, but it takes him some time to realize what he could have with Saffron too, if only he’d take the risk. It’s his past that keeps him from dreaming of a wife like Saffron, and he needs to come to grips with it and accept it, and what Saffron is offering in order for them to get their happy ending. He gives good grovel though, and makes up for his mistakes so that their HEA is achieved. The epilogue ties it all together nicely. It’s a sexy, character driven romance.

He may be the richest man on earth, but self-made Joao Oliviera’s latest deal is personal. To ensure victory, he needs his right-hand woman, Saffron Everhart. But the undeniable tension between them is higher than ever since they finally surrendered to a one-off, emotionally charged night together. And it’s about to skyrocket again, because Joao’s just found out that Saffron is pregnant!

2 Responses to “REVIEW: An Heir for the World’s Richest Man by Maya Blake”