In Because of Audrey by Mary Sullivan, Gray Turner comes home to solve his family’s business affairs only to discover florist Audrey Stone has ruined his business plans for the old family land, by buying it..!!!. The land is the solution to all his family problems but with Audrey in a non-negotiable mode and her thoughts occupying his mind, getting the land back may just prove impossible for him. 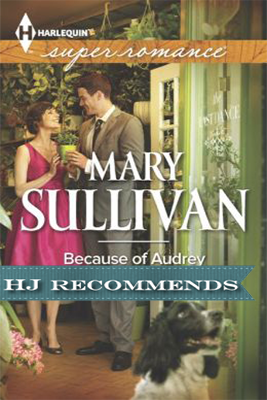 Digging into his family affairs has revealed secrets that could ruin everything. With her help, he might be able to stop that. Funny how he once thought she stood in the way of his plans. Now he thinks Audrey could be the answer to his future!

He only half listened because he couldn’t stop staring at
Audrey’s shoulder. He’d seen hundreds of shoulders. He’d
had a healthy appetite as a teenager. He’d sneaked plenty
of issues of Playboy into the house.
He’d had plenty of girlfriends, had seen beautiful—no,
gorgeous—shoulders, so, what was it about Audrey? The
retro clothes? The fact that she did nothing to flaunt her sex
appeal? The fact that she just was sexy without even trying?
He didn’t even need to touch her, simply look. Men were
visual creatures, and for Gray looking was an aphrodisiac.
Foreplay. Imagining how soft her skin must be was pure pleasure.
He’d never known he could be satisfied just glimpsing
skin, that even knowing he would never touch it could be a joy.
When Mom cinched the strap tightly and started to pin
it, Gray yelled, “No!”
Three heads swung his way, all with wide eyes and mouth agape.

Because of Audrey by Mary Sullivan is a wonderfully written story with great characters, side characters and wonderfully merging different storylines. The story started off a little slow but after a few starting pages, I was hooked to the story. Audrey is an optimistic, confident heroine who knows how to flaunt and be proud of her fuller figure. Gray is the tortured hero with his set of demons and emotional baggage. The side characters too had a story of their own to share and it merged beautifully with the main story. The secrets and suspense of the story kept me hooked throughout. Sometimes I wished the focus was more solely on Gray and Audrey but other than that I had no complaints.

Overall Because Of Audrey by Mary Sullivan is a wonderful super romance and it is just not an escapism read or your average romance. It’s so much more…

Coming home is never simple!
Audrey Stone and her floral shop are thorns in Gray Turner’s side! He’s in Accord, Colorado, trying to focus on wrapping up his family’s business affairs. Instead, thoughts of Audrey and her tempting Hollywood beauty keep filling his head. How can he be this preoccupied with someone whose goals conflict with his?

Then suddenly, he needs Audrey’s support. Digging into his family affairs has revealed secrets that could ruin everything. With her help, he might be able to stop that. Funny how he once thought she stood in the way of his plans. Now he thinks Audrey could be the answer to his future!