In Before the Dawn (Killer Instinct #2) by Cynthia Eden, Darkness has always been in Tucker Frost’s life. From his evil incarnate 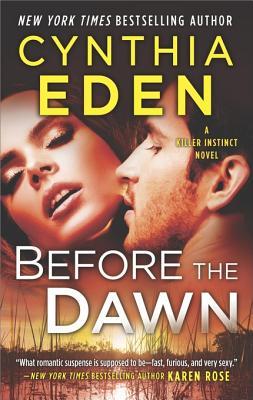 father to the sadistic turn his brother Jason took, he’s been surrounded by it since childhood. But it was when he was forced to end Jason’s life, after his brother tortured and was going to kill Tucker’s then girlfriend Dawn Alexander, that he knew he had to overcome the rage inside him. A stint as a Navy SEAL and then becoming an FBI agent has gone a long way to help. Putting away serial killers has assuaged some of his guilt. But when Tucker is assigned to a case in New Orleans that looks like a copycat of his brother–the Iceman’s–signature work, the past comes rushing back. He’s once again staring down evil and protecting Dawn, who now lives in the city, and finds himself falling head over heels for her again. The stakes are just as high this time around. But Tucker aims to make sure they stay alive and have their second chance no matter what.

“There’s something you need to understand. Right the hell now.” He stared into her eyes. Got lost in her gaze, like he used to do. “I will always believe you. I have *never* doubted you.”
She sucked in a sharp breath. “But I doubted you.”

Dawn is a survivor. She’s lived through a situation that most people don’t get to walk away from. And that’s what’s driven her to become a private investigator, to help locate missing people, and to learn how to defend herself against another possible attack. Over the years, Dawn has often thought of Tucker, her former boyfriend and brother of the man who tried to kill her. She knows now that Tucker wasn’t evil like Jason was and she feels guilty that she pushed him away, reacting so badly to his affection after their ordeal. And now with another killer on the loose in her new hometown, Dawn gets the chance to try to make amends with Tucker when he shows up on the case. The passion is still certainly there. But once again they’re dragged into the middle of a killer’s brutal web. Unlike last time, though, she knows that if they work together as a team, they can stop the murders, capture the criminal, and then hopefully have their happy-ever-after.

“I would never hurt you. I want you to know that… I killed to keep you safe before. Doesn’t that tell you anything?”
It told her they were very dangerous when the two of them were together.

Cynthia Eden’s second book in her exciting Killer Instinct series was everything I hoped it would be. Harrowing suspense, plenty of conflict, and a passionate second chance romance to top it all off. Who could ask for more, right?

‘Dawn thought that he was just as much of a monster as his brother.
And the problem was…she was right.’

I love it when a romantic suspense or thriller can take me on a journey from the first page to the last and keep me guessing–or at least doubting myself–about who the killer truly is. So far with this series, Cynthia Eden has done exactly that. I really did waffle on who I thought the culprit was but it was the twist of why they did it and how they were involved in everything that I didn’t figure out until towards the end. Love that! She also created multidimensional characters with tortured pasts, plots that were intricately woven together with surprise twists, and complicated relationships that broke barriers.

Tucker and Dawn had faced down evil a decade ago and survived. They both certainly still struggled with what happened: the torture Dawn endured, Tucker having to end his brother Jason’s life, and their tender romance ending because of the horror they each went through. I thought the way they reacted to each other and how they acted in their current lives seemed real, with their raw emotions prevalent and creating tension between them. And I think even Dawn’s personality changing, showing her tougher, a bit harder edged seemed natural. She learned how to protect herself so she hopefully wouldn’t be a victim again. She was a solid heroine who was brave and kept her wits about her, which I loved. And Dawn had a wonderful capacity to care and show empathy even after all she’d been through.

Tucker was the same in a way, although with his childhood he was already pretty darn tough. But being a SEAL and then joining the FBI helped him perfect his cool, controlled exterior. Tucker was definitely a tortured hero who ended up being a sincerely good guy. I hated that because of his brother and the horrific way he grew up it made him doubt himself. But Dawn and his fellow FBI agents reminded him of the good he was capable of thankfully. And just a side note on Tucker’s brother: I should mention that the ARC I read switched back and forth from using Mason to Jason several times for his name, although I think it will be Jason in the final copy. Not a big deal, but thought I’d warn you.

Cynthia Eden has proven her ability to hold my attention and spin a captivating story with Before the Dawn. With its fast pace and down to earth characters, I think this will be a winner with readers.

Ex-SEAL Tucker Frost knows that the world is full of evil. He saw it in the face of his own brother, Jason Frost, a cold, methodical, sadistic killer. A killer Tucker put down with his own hands in order to save Jason’s final victim–Dawn Alexander, the only girl who got away from the infamous “Iceman.”

It’s Tucker’s up close and personal experience with evil that’s made him perfect for Samantha Dark’s experimental profiling division in the FBI. And when women start turning up murdered with the same MO used by the Iceman, Tucker is sent back to Louisiana to investigate.

Ten full years have passed since the night that Tucker faced down his brother…and since he last saw Dawn, his one-time lover. But as Tucker and Dawn grapple with a desire that never died, they must also face the shared shadow from their pasts. Both have the same question–has Jason Frost come back from the dead to hunt again? And this time, will he succeed in killing the victim who got away?

12 Responses to “REVIEW: Before the Dawn by Cynthia Eden”