In Bikers and Pearls by Vicki Wilkerson, April Church and her family were emotionally and mentally scarred after a run in with a biker gang when she was a child, leaving them all terribly afraid of motorcycles and their drivers. Now as an adult April Church is running late for the meeting to organize the charity she most wants to be a success. But when she shows up the restaurant is filled with motorcycles and the only parking spot left is next to the motorcycles. A vehicle she is terribly afraid off and the drivers even more after what happened to her father when she was a child. Unfortunately when she opens her door one of the motorcycles falls over and she knows that she didn’t touch it, but that may not make a difference to the owner! But she will get help and talk to the owner to pay for damages. 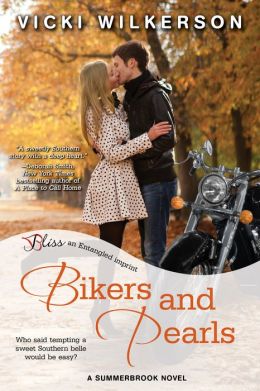 Bullworth Clayton doesn’t like the ladies wearing pearls that believe they are so high and mighty. Now he has to deal with pastel-and-pearls April. He only wants to show her to the dining room where the meeting is being held, but she treats him like he is going to do something to her, and she has a motorcycle mirror in her hands. But as he tries to offer his help she declines.

Unfortunately for April all the seats at her preferred table are taken, she has to sit with the people she can least relate with. At the meeting each table has to decide on how they will contribute and gather funds for the charity, and she is now stuck with all the motorcyclist.

Bull believes that April is as judgmental as all the other pearl clad ladies, but April keeps doing and saying things that keep him wondering if maybe his opinions may be wrong. While April knows that not all men in motorcycles are dangerous, she still believes that those that mainly ride them are dangerous, but her opinions are about to be turned upside down by Bull.

As Bull and April work together, they learn that not everything is as it seems on the outside, and what truly matters is on the inside. They will have experiences that they would not have believed possible with each other. And the dull life that April lived will be put into perspective along with her fears and believes. While Bull will also have to learn to see beyond the outside façade and into the real woman that hides underneath all the propriety of a the woman that wants to be socially accepted.. Both Bull and April will learn that belonging does not mean to be part of something that you don’t believe in, but belonging and accepting yourself first.

A fun and hot read, Bull will make you fall in love, while April may get on your nerves a bit but will also break your heart, don’t miss Bikers and Pearls by Vicki Wilkerson.

Publisher: Entangled: Bliss (August 12, 2013)
Who said tempting a sweet Southern belle would be easy?
When rebel biker Bullworth Clayton gets tangled up with pastel-and-pearls-clad April Church, sparks fly. Sure, April would clearly rather work with anyone else, but if teaming up with Bull means a successful charity event for a sick little boy they both care about, then so be it.
April is baffled at how drawn she is to the leather-wearing, tattooed Bull—he just doesn’t fit with her simple, safe, country-club life. And as much as the handsomely rugged man tempts her, she still can’t shake the images of the tragic motorcycle accident from her past, which left her scarred and her father broken.
Bull tempts her to don a pair of leather pants and go for a ride with him, while April desperately tries to resist her attraction to the wild side and keep her exploits hidden from her small town. Will they be able to navigate their differences and find a middle road to love?