In Roman Holiday 1: Chained by Ruthie Knox, after the recent death of her grandmother, Ashley Bowman returns to Florida Keys to the crappy vacation rental she called home. Only to find out that her grandmother had sold the land to a heartless Miami developer that will tear everything down and build a resort and she has one day to clear out before demolition begins. 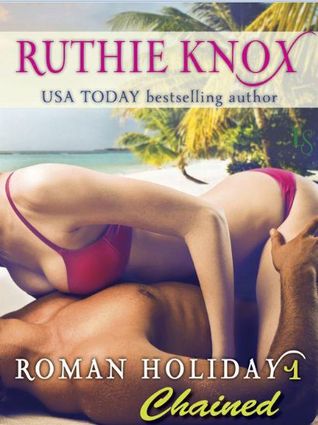 Ashley has been trying to talk to Roman Diaz with to avail, but she will not give in easily and decides to chain herself to a palm tree. Roman and his crew cannot start demolition with her there, for if anything were to happen to her he could get sued. What Ashley doesn’t know is that Roman has been keeping an eye on her since she chained herself there.

Roman needs to begin demolition before the storm comes in and stops all work. He knows that he cannot allow anything to happen to Ashley and with her being there she is a liability. Everybody is already evacuating, but he cannot leave without her and have her being possibly injured by any stray debris.

Roman is attracted to Ashley but he needs to build the resort ASAP. He not only got people and banks to loan him money for his dream, but only by doing this will he be able to make a name for himself. Besides once he returns to Miami he will try to take the next step and ask his girlfriend to marry him, that way he will have all the power he needs to become the developer he is working very hard to be.

But no matter how much Roman works to get things his way, Ashley has a few ideas of her own that will put a stop to his development. She just needs him to do what she wants without knowing the reason behind it.

All I can say is wow, not only is Roman Holiday 1 hot and funny but also intriguing. I want to learn more about Roman and his background, and I also wants to know more about Ashley and what she will do to make sure that Roman doesn’t develop in the land that used to belong to her grandmother.

Ashley Bowman is having a bad week. Reeling from the death of her beloved grandmother, she returns to the Florida Keys only to learn that a heartless Miami developer has gotten hold of the crappy vacation rentals she calls home. Ashley has one day to clear out before Roman Díaz destroys the only place in the world that matters to her. Chaining herself to a palm tree in the bulldozers’ path seems like a good way to stop him . . . until she realizes she should’ve brought food and water. And pants. Also, it would help if the evil developer weren’t so ridiculously hot.

The last thing Roman Díaz needs is some sun-kissed blond protester getting her picture in the newspaper and messing up his plans. He bought the property fair and square, and the resort he wants to build on the site is the key to realizing his highest ambitions. But when a hurricane blows through, Roman has to hustle Ashley to safety if he wants to protect his reputation—and that means giving in to her unreasonable demands.

Roman needs to learn a little compassion, and Ashley’s decided to teach it to him . . . even if she has to drag him all over the Eastern Seaboard to do it.