In Double the Trouble by Maureen Child, Colton King and Penny Oaks met in Las Vegas during a convention and ended up getting married by the end of the week. Their marriage however ends just after twenty-four hours when Colton walks out on Penny stating that “The marriage was a big mistake”. Now after almost two years later, Colton discovers Penny’s huge secret—actually two little secrets: a baby boy and a baby girl. When 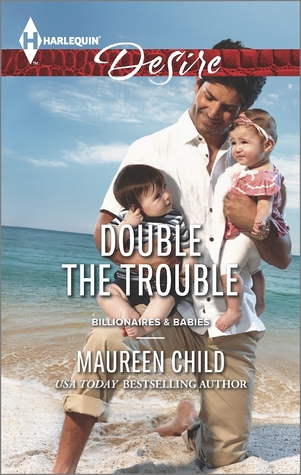 they come face to face again after two years, Colton demands an explanation from Penny for keeping his children away from him. Penny is recovering from a recent surgery and is shocked to see him again but she is not willing to trust him.

Colt wants to be a part of his children’s life but he finds himself falling for Penny all over again. Will they take a chance on love this time around..?

Double the Trouble by Maureen Child is a well written, enjoyable second chance romance with a secret pregnancy plot. Colt is a strong hero who flirts with death on a regular basis due to his love for extreme sports. He is an alpha male and is unable to make peace with himself due to a certain incident in his past. Penny is a strong and independent person who does not give her trust easily. She is afraid to take a second chance on Colt because she is afraid that he will desert her again but for the sake of their children, she has to let Colt into her life back again.

Both Colt and Penny had issues with their past which they sorted out together. The chemistry between both of them makes their romance much more interesting and enjoyable. I liked the secondary character as well,especially Colt’s twin brother, Connor was also a fun character and I loved the relationship between the brothers.

Double the Trouble is also a part of the King Family series by Maureen Child and can be easily read as a stand alone.

Overall, Double the Trouble by Maureen Child is a well written sweet and enjoyable romance about two individuals confronting their inner demons to find love together. If you love second chance romance and are a fan of Maureen Child then you will love this one.

When Colton King ended his impetuous marriage to Penny Oaks after just twenty-four hours, it was out of sight, out of mind. But now, more than a year later, Colton discovers Penny’s huge secret—actually two little secrets: a baby boy and a baby girl.

Colton’s only option is to lay claim to his twins. But soon he finds himself laying claim to Penny all over again. Now they have to ask themselves: Was their whirlwind marriage meant to last a lifetime?

4 Responses to “REVIEW: Double the Trouble by Maureen Child”