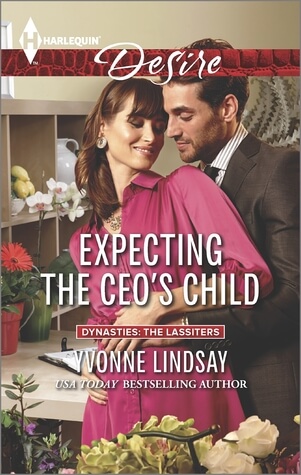 Expecting the CEO’s Child by Yvonne Lindsay: This book is the third part in the Lasstier series.

In Expecting the CEO’s Child by Yvonne Lindsay,Jenna’s passionate encounter with Dylan Lassiter had consequences and now she is pregnant with his baby.She does not plan to tell him and intrude is never-settling-at-one-place personality.Dylan however finds out when he is unablw to stay away and visits Jenna.
After inheriting his adoptive father’s restaurant empire,the celebrity chef is determined to marry Jenna but the petite florist does not share his opinion and refuses him flat out.Dylan starts a seduction scheme to win Jenna’s heart but just as he is gaining ground, the media unearths a shocking secret from the mother-to-be’s past. Now Dylan could lose the woman—and
family—he wants mor than anything….

Expecting the CEO’s Child is a well written romance with an enjoyable storyline.Both Dylan and Jenna don’t see eye to eye and were both not willing to be the one to compromise.As the story unfolds it was easier to understand their rigid stance.The story flows in a nice smooth pace and the amazing chemistry between the characters makes the romance believable.I did not agree with the ending and it kind off took away the overall enjoyment of the story.

Overall,Expecting the CEO’s Child is an enjoyable romance with a HEA.The ending could have been achieved diffrently but on the whole it was good.

No woman says no to a Lassiter Months after their passionate tryst, Dylan Lassiter can’t get Jenna Montgomery out of his mind. Maybe being named CEO of his adoptive father’s restaurant empire is making the onetime playboy think about settling down. Or maybe it’s because Dylan just found out Jenna’s having his baby…. When the petite florist flat-out refuses to marry him, the celebrity chef kicks his seduce/woo/wed scheme into high gear. But just as he’s gaining ground, the media unearths a shocking secret from the mother-to-be’s past. Now Dylan could lose the woman—and family—he wants more than anything….

2 Responses to “REVIEW: Expecting the CEO’s Child by Yvonne Lindsay”