Forged by Fate (Bound by Hades #1) by Reese Monroe: Theo is the gatekeeper to Hades and has been waiting almost a millennia for his mate. Now after so many years his wait is finally over when he finds Saddie Nowland. Only she does not know anything about her fate and has no idea about Theo 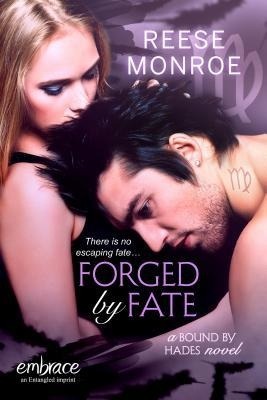 Saddie Nowland wants to make something of her life and she has everything planned out. She never knew her parents and was a child of the state. Graduating college at the age of eighteen and accepting a six-figure job is just what she needs to prove she’s made something of herself.But strange events start happening in her life like the appearance of a tattoo on her shoulder, demons attacking her in broad daylight and Theo’s sudden entry in her life throw her life into a big chaos.

When a vicious demon hell bent on revenge escapes from Hades and makes Saddie his target, her life is thrust into a supernatural world where she has only Theo and his brother Justin for guidance. An unexplained primal connection between Saddie and Theo soon proves more imperative to their survival than either could have ever imagined—and just may be the key to the world’s survival.

Forged by Fate was a good book filled with so many intresting elements to keep you hooked till the end..!!

It had action romance, some drama and the characters were really so much easy to like because of the way they were written. The romance had a slow buildup and I liked it because it helped me to understand the relationship between Theo and Saddie more. Justin was my favorite character in the book because of his antics which entertained me so much(sometimes more than the lead characters). The supernatural element actually binds together the whole story together and anyone who likes paranormal romances with slow buildups will like this story.

Reese Monroe has written a great story with likable characters and I liked what Forged by Fate has to offer.Recommended for paranormal romance lovers.

He’s waited more than 900 years to love her…

Being the Gatekeeper to Hades is no small feat, and waiting almost a millennia to meet your mate is damn near impossible. But Theo Bradford’s mark has finally surfaced on his intended. Now all he has to do is find her and convince her to embrace her supernatural heritage.

Young genius, Sadie Nowland, has got life figured out. Graduating college at the age of eighteen and accepting a six-figure job is just what she needs to prove she’s made something of herself. But when a strange tattoo mysteriously appears on her shoulder and Theo starts talking about Mates, it catapults her neatly laid out life into chaos.

Somehow a vicious demon banished to Hades defies Theo’s vanquish and returns, setting his target on Sadie, and she is thrust into the volatile world of Shomrei warriors and a connection to Theo her brain can’t comprehend and her body can’t deny. That primal bond proves more imperative to their survival than either could have ever imagined—and just may be the key to the world’s survival.