Gamble in Gold by Natalie Anderson: Seven years ago high school student Lexie Peterson was an exchange student and lived with the Marchetti family for six months in Boston.  Lexie was very shy back then, which was why her parents 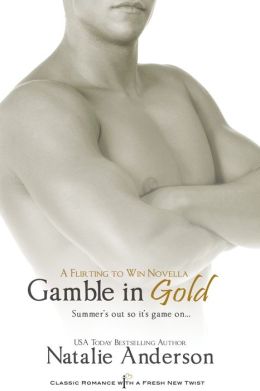 wanted her to have a new experience and leave New Zealand. Lexi got along very well with the her host family and became very good friends with Dani Marchetti and they have remained friends ever since.

Lexi fell head over heels in love with Luke, Dani’s older brother.  In fact, she experienced her first real, lustful kiss, while riding the ferris wheel with him. After their wanton engagement, they ignored each other until Lexi returned home to New Zealand.  Lexi’s heart was broken.  Little did she know that Luke’s parents had observed their make-out session and as a result, forbade him from being around her.  She left for home without even a goodbye.  She also did not know that Luke cherished their short time together and thought about her as much as she did about him.

It is now seven years later and Lexi is in London, where Dani and Luke happen to live.  Lexi is is a traveler and in between jobs.  Knowing that Luke will be away for a month, Dani offers Lexi his place to stay until she can find a job and get her act together.  Due to an injured knee, Luke returns from his trip early.  Of course he is surprised to see Lexi, especially in the flirty, gold trimmed neglige that she is wearing.  Overtime, they talk and spend some time with one another. Their feelings develop and a future is possible. Gamble in Gold by Natalie Anderson, is a quick-paced, well written novella.

Publisher: Entangled: Indulgence (August 29, 2013)
Seven years have passed since shy Lexie Peterson had her heart trampled by her teenage crush. And Luke Marchetti walks into his flat to find Lexie in a negligee, all he can think of is having a little flirt and fling. But Lexie’s determination to keep him at a distance makes him realize she deserves more than he can offer. Is one kiss enough to entice the two to take a gamble on love?

« REVIEW: E for England by Elisabeth Rose
REVIEW: Losing It by Cora Carmack »

One Response to “REVIEW: Gamble in Gold by Natalie Anderson”