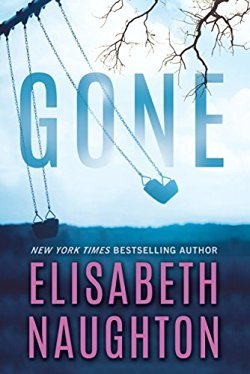 Gone (Deadly Secrets #2) by Elisabeth Naughton: If you want an amazing story with a lot of suspense and a truly HEA, than this is the book for you. I have loved everything that I have read by Elisabeth Naughton, and I have to say that this Deadly Secrets series ranks right up there with her Paranormal series (which is what hooked me on Elisabeth in the first place!) This is the second book in the series and this is Alec and Raegan’s story.

Three years ago, Alec and Raegan McClane lived every parent’s worst nightmare: their one-year-old daughter, Emma, was abducted from a park when Alec turned his back for just a moment. Emma was never found, and presumed dead. Alec cannot stop blaming himself, while Raegan knows that it could have happened to anyone. Instead of turning to each other, Alec turned to the bottle and their marriage fell apart.

Four years later, Alec and Raegan are thrown back together as they begin investigating a string of child abductions similar to that of Emma’s. While Raegan has never given up hope that they will one day find their little girl, it will take all of her faith, all of her hope, and all the love that she can pour into Alec to get his to truly forgive himself, to get his to believe in a miracle, and to maybe give these two a second chance at a family together.

I have to say that the demons that plagued Alec were heart wrenching. I felt so much for these characters. Alec knows all about pain, suffering and abuse from his no good father. He has a drinking problem that he has tried to keep hidden from everyone, including his family for years. The guilt over Emma was his breaking point. I loved that after all this time, Raegan still loves Alec, still believes in Alec, will move mountains and more to convince him that he is not to blame.

The fact that they are able to work through their issues, and give their love a second chance was an added bonus to the already incredible story that builds to an amazing HEA. If you have not read the first book in this series, no worries, because this story can be read a stand alone. I cannot wait for the next book in this amazing series.

Three years ago, Alec and Raegan McClane lived every parent’s worst nightmare: their one-year-old daughter, Emma, was abducted from a park when Alec turned his back for just a moment. Emma was never found, and presumed dead. The crushing trauma, plus Alec’s unbearable guilt, ended the couple’s marriage.

Now a four-year-old girl matching Emma’s profile is found wandering a local park. Alec and Raegan are heartbroken to discover she’s not their daughter but are newly motivated to find closure…and each secretly feels desperate to be in the other’s presence again.

Alec suspects his vengeful biological father is behind Emma’s disappearance. But as Raegan investigates other abductions in the area, she sees a pattern—and begins to wonder if Emma’s kidnapping is actually linked to something more sinister.

As Alec and Raegan race to uncover the truth, a long-burning spark rekindles into smoldering passion, and they realize they need each other now more than ever.