Her Mistletoe Wish by Lucy Clark is the last book in the Sunshine General Hospital series. It tells the story of Dr.Reggie Smith who gets a second chance at love when Dr. Flynn Jamieson walks back into her life and her E.R. He is the man who broke her 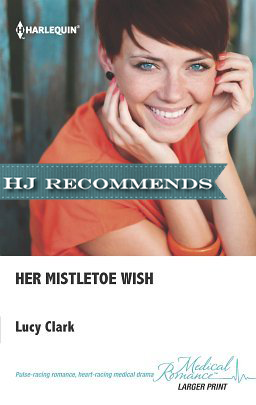 heart years ago after breaking the promises he made to her. Reggie has still not recovered from the heartbreak Flynn gave her and is shocked to realize she still finds the charismatic surgeon oh-so-irresistible!

Flynn still regrets the way he broke Reggie’s heart and left her alone. She was the one who got away and this Christmas he is determined to undo all the mistakes he made and win her heart once again.

Her Mistletoe Wish is undoubtedly one of the author’ best and I found it to be the best book in the Sunshine General Hospital series. It has enough medical details, a good inclusion of Reggie’s friends from the previous book and a solid romance which is always in the spotlight.

Reggie was a relatable character, she deserved to have her happily after ever after going through so much in the past. Flynn was the normal run of the mill kind of hero for me because his reasons for leaving Reggie in the first place did not sit down well with me.

Overall, Her Mistletoe Wish by Lucy Clark is about second chances and finding love when you think everything is lost. With a great story and a strong heroine, it makes a great Christmas read.

Of all the hospitals, why did he have to walk into hers?

Bubbly Dr. Reggie Smith can’t believe her eyes when gorgeous Dr. Flynn Jamieson walks back into her life and her E.R. He’s the man who broke her heart, and Reggie is horrified to realize she still finds the charismatic surgeon oh-so-irresistible! Maybe it’s because Flynn seems different—has he finally managed to throw off the shackles that once came between them? If so, maybe this Christmas Reggie will get what she’s always wished for….