Highland Jewel by May McGoldrick is the second book in the Royal Highlander series. 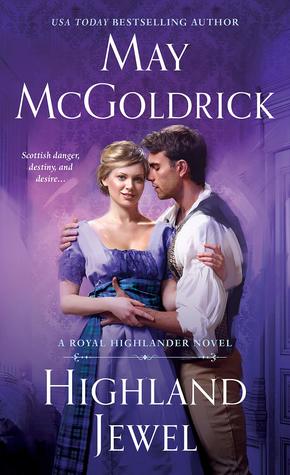 I would recommend reading the first book since this book picks up where the first one left off but focuses on Maisie and Niall. As always, the authors did a wonderful job describing the turmoil and the political atmosphere in Scotland during this time frame.

The prologue introduces readers to Cinead’s mother, Princess Caroline, and the events that lead to Cinead going to Scotland. The story then takes us to Dalmigavie Castle, when Cinead “the son of Scotland” has married Isabella, Maisie’s sister.

Maisie and her sisters have traveled to Dalmigavie Castle after Isabella’s husband was killed in Edinburgh for assisting the reformers. When Niall Campbell shows up at the castle, Maisie is excited that he has found her. Then she remembers the last time she had seen Niall and he had released her from the promises they had made to each other. Niall’s sister, Fiona, had been arrested and Niall had a mission to perform in order for Fiona to be released and he wasn’t sure if he would be coming back. Niall is forced to make a decision between his honor and fulfilling his mission. The intrigue surrounding Princess Caroline being successful in meeting her son is captivating.

Will the king’s men be able to prevent Princess Caroline from traveling to Dalmigavie Castle to meet her son? Can Niall stay true to his beliefs and still rescue his sister? The suspense through out the story kept your attention and leads the reader into the third book. This is a wonderful series if you love Scotland history and romance. I can’t wait to read the next book in the series. I’m sure it will be another great book!

Maisie Murray is the picture of docility, quiet and compliant in the eyes of her family. To her activist friends, however, she’s a fearless crusader for women’s rights. In the wake of the Peterloo Massacre, Maisie and a friend found the Edinburgh Female Reform Society, and she carries the banner for universal suffrage.

Niall Campbell, a hero of the wars, a decorated officer of the Royal Highland Regiment, is battle weary and searching for stability in his life. A fierce warrior by training and a poet at heart, Niall walks away from the shining career that lies ahead of him, to the dismay of his superiors. In saving his sister when a protest turns violent, he meets Maisie. Their relationship begins as one of experience versus idealism, of scars versus hope. Soon, however, he finds in Maisie the heart he longs for.

When Niall’s sister is arrested and disappears, he quickly realizes his life is not his own, for the British authorities have a mission for him to accomplish in exchange for his sister’s freedom. Overnight, Maisie loses Niall, her friend, and her home. And the wake of the riots that sweep through the cities of Scotland, Maisie’s own sister Isabella is branded a traitor to the crown, and the family must flee to the Highlands. Here in the heart of the Highlands, Maisie runs into Niall again. He has a new name and carries a message of hope―but Niall has a task to complete―and their future rests on their ability to overcome the forces that divide them, or―for the future of Scotland―she must stop the man who owns her heart.

« REVIEW: Enamored by J.S. Scott
Spotlight & Giveaway: How to Capture a Duke by Tina Gabrielle »

2 Responses to “REVIEW: Highland Jewel by May McGoldrick”