How to Catch a Queen by Alyssa Cole: Shanti has wanted to be a queen for as long as she can remember, so much so 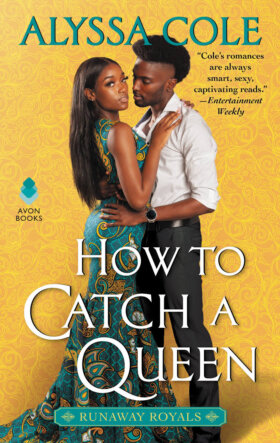 that she even studied for it, so when she is presented with the opportunity to marry a royal she takes it in order to help better the lives of her people. Sanyu has known all his life that he would one day take his rightful place as King of Njaza, and with this comes a list of things that are required of him; one of which is taking a wife.

With their marriage starting of as one of business and convince Sanyu and Shanti hardly see each other even though Shanti wants to help Sanyu bring their people into a better place. But as the two newly weds begin to work together to move their people into a more progressive and prosperous future they begin to learn more and more about each other. But when turmoil strikes and Shanti flees will Sanyu go after his queen and still be able to rule his nation?

The thing I loved the most about this book was that Shanti was such a strong female, she knew what she wanted and she went out and got it. I liked that she worked so hard to help her nation even if though she got so much of hate from the people. As for Sanyu my heart broke for him, not only did he have to pressure of ruling a nation but he has also been suffering with anxiety and grief. I really liked that these two brought out the best in each other and supported each other.

Overall this was an enjoyable read and introduction into what promises to be an entertaining royal series.

When Shanti Mohapi weds the king of Njaza, her dream of becoming a queen finally comes true. But it’s nothing like she imagined. Shanti and her husband may share an immediate and powerful attraction, but her subjects see her as an outsider, and everything she was taught about being the perfect wife goes disastrously wrong.

A king must rule with an iron fist, and newly crowned King Sanyu was born perfectly fitted for the gauntlet, even if he wishes he weren’t. He agrees to take a wife as is required of him, though he doesn’t expect to actually fall in love. Even more vexing? His beguiling new queen seems to have the answers to his country’s problems—except no one will listen to her.

By day, they lead separate lives. By night, she wears the crown, and he bows to her demands in matters of politics and passion. When turmoil erupts in their kingdom and their marriage, Shanti goes on the run, and Sanyu must learn whether he has what it takes both to lead his people and to catch his queen

One Response to “REVIEW: How to Catch a Queen by Alyssa Cole”