Wow. Maybe it’s been a while since I read a really good paranormal romance… But holy cow, I loved Hunger Awakened by Dee Carney.

I’ll admit – when we first meet our hero, Sebastian, I didn’t really like him. He’s a vampire and he’s in need of blood and sex. So he goes to this club to find a willing donor for both. Umm, yeah… I don’t know why but Sebastian just turned me right off. I guess since he’s been around for hundreds of years, humans really are not much more than food for him and 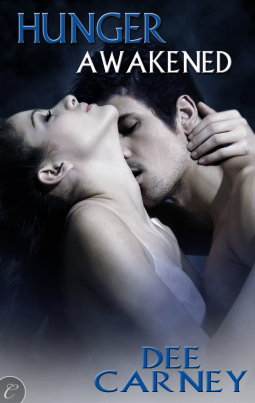 so he doesn’t think too much about them. Doesn’t like them, doesn’t hate them. Maybe he’s a little resentful because he NEEDS them but overall, doesn’t care one way or another. I think that’s why I didn’t like him at first. Also, he’s not like a lot of vampires; conflicted about killing innocents or stealing their blood or whatever. It needs to be done so he does it and he does it with the least amount of discomfort he can manage. It was so much like a business transaction… blech. But, that all changes when he starts feeling sick. But vampires don’t get sick, right? Sure, he’s a half vampire, half unknown but even still, he knows what he’s feeling is wrong. There’s this strange heat and incredible burning sensation starting inside him, trying to burn its way out. Then, he thinks he’s about to throw up and that’s REALLY something that vampires don’t do!! To make matters worse, when he stumbles into the alley behind the club, someone is there to witness his humiliation. Little does Sebastian know that matters weren’t worse. His life actually just got a whole lot better, even if it is about to be turned upside down.

That’s when our heroine, Alice, steps in. She’s homeless due to a strange medical condition so she’s behind the club, searching Dumpsters for something to eat. When she spies a bag with a donut in it (only one bite taken out of it! Score!), she also hears someone retching next to another Dumpster. She’s not so far into the homeless life that she has stopped wanting to help people, so she goes and checks it out. Whoever it is certainly sounds worse off than Alice! And really, all she needs to do is see if they’re ok and if not, use their phone to call an ambulance. Then her conscience will be clear and she can move on to figuring out where she can stay for the night. Of course, it’s never that simple! I really liked Alice. Because of her rough life and medical issues, she has kind of a “Carpe Diem” kind of attitude and she lives for the moment as much as she can. I think most of us want to be more like that but life gets in the way and we end up worrying over things that are way off in the future or things that we can’t change. When you’re in Alice’s situation, you don’t really have the luxury of worrying about tomorrow because today is enough of a struggle. And even though Alice is homeless and has a junkie for a brother, she hasn’t resorted to crime and she doesn’t have a nasty attitude about people. Maybe it’s unrealistic to think that someone who has to eat from Dumpsters wouldn’t be angry at life but I found that she wasn’t and I liked her even more.

When Alice and Sebastian get together, it doesn’t make sense for either of them, strangers, human and vampire. But they are inexplicably drawn to each other. Alice gives Sebastian her trust and respect, which happens to be two things that Sebastian values and finds his own life to be lacking in. Sebastian gives Alice, safety and security, which we know she really needs. Aside from all that, Sebastian is really sexy and Alice finds herself truly living for the moment when she’s in his arms. All worried about her illness or food or shelter just fade away and there is only Sebastian. Man, doesn’t that sound awesome?! And for Sebastian, when Alice touches him, the heat subsides and he feels better. Of course, we, as the reader, know that they are destined for each other, but they don’t know it. It’s so great watching them learn more about each other and learn more about the other’s illness. If the author could get the right kind of publicity, I think Alice and Sebastian could go down as one of those famous literary couples. THAT’S how great they were together!

I don’t really have a lot of complaints about this book. I thought that Alice hid her illness from Sebastian a teensy bit too long, maybe? And I was thinking that her illness was going to have some grand significance due to how the blurb described her touch as being Sebastian’s only relief but it really didn’t. I mean, I thought she was going to be a new kind of vampire or something. But she’s human. Whether or not she STAYS human is something you’ll have to read the book to find out! By the way, I think the “illness” that Sebastian is suffering from is awesome and cool but I won’t reveal what it is. I thought the story had great pacing and the characters were really well written. Sure, I didn’t like Sebastian at first but that’s something that I really love to have in a romance novel: a character that you don’t like or identify with at first, finally coming around to being the hero/heroine you WANT them to be.

Overall, I would definitely recommend this book. I loved it and I’m sure I’m going to read it again in the near future. I stayed up until 4am, finishing this one and I found myself laughing and crying at the end. If you like paranormal romance, this book is for you. If you aren’t sure paranormal romance is your thing, give this one a try. I’m sure you’ll enjoy it!

There’s something inside of him, some dormant part that’s been awakened. And now it wants to be set free…

Something’s wrong with Sebastian Kent. Already considered an outsider in the vampire community as a half-vampire, half-something else, he’ll do everything in his power to hide his weakness. But when sickness strikes, he has no choice but to turn to a human for help—a woman whose touch provides his only relief.

Alice Bowman is hiding her own illness, one that has left her homeless. When she comes to Bast’s aid, she doesn’t expect to be thrust into the world of vampires. He offers her refuge and a job researching his family history in the hope of finding a clue to his mysterious affliction. She can’t resist his offer of protection—and the chance to spend more time with the man who arouses her every desire.

But as Bast’s and Alice’s hunger for each other grows, so does the power of Bast’s unexplained half. And soon his unknown past and her uncertain future threaten to keep them apart forever…