In If Not for You (New Beginnings #3) by Debbie Macomber, Just when music teacher Beth Prudhomme was finally living on her 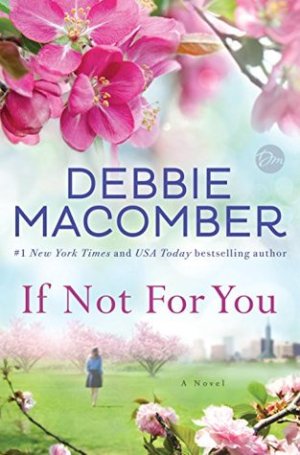 own without her mother micromanaging everything, she was sideswiped by life. And not just figuratively. After an awkward blind date with auto mechanic Sam Carney, Beth was nearly killed in a horrible car accident. But it was that gruff man–who witnessed the crash firsthand–who stayed by her side at the scene and even visited her in the hospital daily. What could have been one of the worst times of her life suddenly becomes a new beginning.

…’She was riding high, overwhelmed at the man sitting by her side. She’d mentioned ever so briefly that she hadn’t been able to sleep well, and now here he was, playing and singing to her. No one had ever done anything like this for her before. No one.’

Under the tough guy exterior, Beth learns that Sam is a gentle man who loves music as much as she does. And before long they’re inseparable. Her aunt Sunshine, a famous but down to earth artist, very much approves of the relationship. But Beth’s mother Ellie does not, feeling a mechanic like Sam is not good enough for her daughter. Thankfully Sam isn’t easily deterred, but he does find himself shook up over how serious things have gotten with Beth so quickly. And when she gets involved in not only his past but the thirty year tiff between sisters Sunshine and Ellie, things take a negative turn, leaving everyone involved to figure out how to move forward from there.

“I’ve been wanting you to kiss me forever. What took you so long?”
Sam grinned. Good question. “The hell if I know. All I can say is that it was worth the wait.”
Her smile widened. “Yes, it was.”

Near-tragedy brought two musical soulmates together in If Not for You, a novel which was part tender romance and part family drama. Debbie Macomber’s heartfelt messages and authentic look at personal relationships definitely brought a smile to my lips throughout the majority of Beth and Sam’s journey.

“I haven’t wanted to risk my heart until you.”

You can count on Debbie Macomber for a solid story that’s well written and full of wonderful emotions. Sometimes I connect with her couples right away and others I have to warm up to. In Beth and Sam’s case, I liked them right from the start and thought they were so darn sweet and cute together as a couple. I might not have been convinced they would work things out, as they were the definition of an opposites attract pair, but they were both pretty great characters all on their own. Sam was just an all around nice guy, a talented mechanic and musician who wasn’t looking for a serious relationship before meeting Beth. And Beth, well, she had the most generous heart, always going above and beyond for her family and friends.

So this was an interesting combination of the slow burn romance between Sam and Beth, and Beth’s aunt Sunshine’s heartbreaking past with her sister Ellie (Beth’s mom). I liked getting the three POVs: Beth, Sam, and Sunshine. I thought it gave readers better insight into where each character stood emotionally and sometimes even physically, like with Beth after her accident. Sunshine ended up being one of my favorite characters. She was so openhearted and absolutely adored her niece. She was kind, and even when Beth dug into Sunshine’s past, she didn’t get angry, knowing Beth was doing things out of love.

I will admit I struggled with the rating on this a bit, deciding between 3.5 Stars and 4 Stars. In the end, though, I had to go with 4. I mean, it’s Debbie Macomber. 😉 Plus I really liked the story overall, it was just some of Sam’s knee jerk reactions, Beth’s meddling, and the quick resolution at the end that gave me pause.

A heartwarming story of forgiveness and unexpected love, If Not for You will be perfect for fans of romance and women’s fiction. And with happily ever afters all the way around, how can you lose, right?

An emotionally stirring novel that shows how obstacles can be overcome, differences can be strengths, and sometimes a choice can seem wrong even though it’s absolutely right

If not for her loving but controlling parents, Beth Prudhomme might never have taken charge of her life and moved from her native Chicago to Portland, Oregon, where she’s reconnected with her spirited Aunt Sunshine and found a job as a high school music teacher. If not for her friend Nichole, Beth would never have met Sam Carney, although first impressions have left Beth with serious doubts. Sam is everything Beth is not—and her parents’ worst nightmare: a tattooed auto mechanic who’s rough around the edges. Reserved and smart as a whip, Beth isn’t exactly Sam’s usual beer-drinking, pool-playing type of woman, either.

But if not for an awkward setup one evening, Beth might never have left early and been involved in a car crash. And if not for Sam—who witnessed the terrifying ordeal, rushed to her aid, and stayed with her until help arrived—Beth might have been all alone, or worse. Yet as events play out, Sam feels compelled to check on Beth almost daily at the hospital—even bringing his guitar to play songs to lift her spirits. Soon their unlikely friendship evolves into an intense attraction that surprises them both.

Before long, Beth’s strong-willed mother, Ellie, blows into town spouting harsh opinions, especially about Sam, and reopening old wounds with Sunshine. When shocking secrets from Sam’s past are revealed, Beth struggles to reconcile her feelings. But when Beth goes a step too far, she risks losing the man and the life she’s come to love.

14 Responses to “REVIEW: If Not for You by Debbie Macomber”