In Juniper Hill (The Edens #2) by Devney Perry, Memphis Ward has been on the road for what feels like forever. But she’s finally 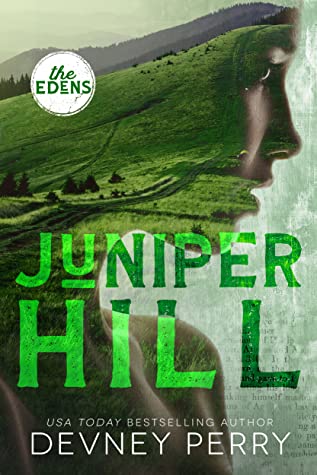 made it to Quincy, Montana, after leaving her glamorous life behind in NYC. She knows choosing her eight-week-old son Drake’s emotional well-being over living under her rich family’s thumb is her best option. But Memphis didn’t realize how tough it would be. As the new housekeeper at The Eloise Inn and a temporary loft apartment tenant to chef Knox Eden, she’s stressed out and exhausted. So the last thing she wants to do is tick off her gorgeous landlord when Drake fusses all night long, every single night.

‘I was hanging on by threads most days. I gave Drake all my extra. If Knox made me fall in love with him and then we fell apart, I would fall apart.’

But Knox surprises Memphis when he comes to her rescue, helping calm her newborn–and her–in the process which leads to feelings she just doesn’t have the time or space in her heart for, truth be told. Knox is persistent when he wants to be, though. And before long, he’s spending his free time with the beautiful mother and her adorable son instead of planning menus for his restaurant. Building a relationship after being badly burned in the past is risky. But Knox has the feeling that Memphis and Drake are worth taking a chance on. As is the opportunity to be the first person in Memphis’s life to show her how worthy she is of someone’s love, just by being the wonderful person she already is.

‘I’d had enough dramatics for a lifetime and Memphis had drama written all over her pretty face.’

A small town romance about starting over and finding where you belong, Juniper Hill was another smashing success from Devney Perry, who–in my humble opinion–can do no wrong.

She looked down at her son and traced her fingers along his forehead, brushing the wisps of hair out of his face. “Some days it feels like he’s all I have.”
“Not anymore.”

It might sound corny but my heart is so full after reading Juniper Hill. I absolutely loved the main characters, Memphis and Knox, and got a kick out of catching up with the lively Eden family again. And while there wasn’t quite as much of a thread of suspense in this second installment in the series as book one, Indigo Ridge, there was just enough drama paired up with the steamy romance to keep things very interesting.

Aside from the delicious tension between grumpy chef Knox and frazzled new mom Memphis, what held my attention was figuring out the details of each of their pasts while they both basically started over in Quincy. Knox had been back in his hometown for about five years after time in San Francisco–something he didn’t like to discuss with anyone, while Memphis left her glitzy, privileged world behind in NYC to literally begin a whole new life for her baby boy Drake. And it felt authentic for each of them, not forced. Once their stories unfolded, I had an even greater sense of understanding why Memphis and Knox were gun shy about relationships. Believe me, they certainly had their reasons.

Juniper Hill hit all of the bells and whistles of what I crave in a Devney Perry romance. And the intense set up for book three, Garnet Flats, at the end of this novel has me counting down the days to get to Knox’s sister Talia’s second chance romance. Can’t wait!

QOTD: Have you–or someone you know–ever moved to a totally different place and started a whole new life?

Memphis Ward arrives in Quincy, Montana, on the fifth worst day of her life. She needs a shower. She needs a snack. She needs some sanity. Because moving across the country with her newborn baby is by far the craziest thing she’s ever done.

But maybe it takes a little crazy to build a good life. If putting the past behind her requires a thousand miles and a new town, she’ll do it if it means a better future for her son. Even if it requires setting aside the glamour of her former life. Even if it requires working as a housekeeper at The Eloise Inn and living in an apartment above a garage.

It’s there, on the fifth worst day of her life, that she meets the handsomest man she’s ever laid eyes on. Knox Eden is a beautiful, sinful dream, a chef and her temporary landlord. With his sharp, stubbled jaw and tattooed arms, he’s raw and rugged and everything she’s never had—and never will. Because after the first worst day of her life, Memphis learned a good life requires giving up on her dreams too. And a man like Knox Eden will only ever be a dream.

« REVIEW: The Italian’s Bargain for His Bride by Chantelle Shaw
Spotlight & Giveaway: Breaking the Cowboy’s Rules by Sinclair Jayne »