Leap of Faith (On the Ropes) by Michelle Cary: Ultimate Extreme Wrestling Vixen Lexi Blackwell has been involved with wrestling from the time she could walk. Her dad, Nick Blackwell, is a former UEW megastar and it is because of him that she chose the sport as her career. The big league wrestling community is a close knit group that looks out for each other. Because they have 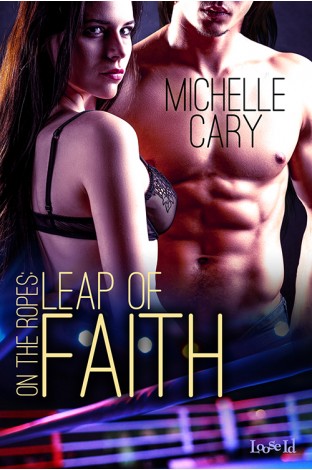 sacrificed their personal lives for their craft, wrestlers live a lonely existence and rely on one another for support, encouragement and comfort. Wrestlers are in great physical shape and spend a lot of time working-out.

Lexi never thought she could fall in love again after suffering intensely from an emotional and physical heartbreak a few years ago. To this day, when she thinks about that time in her life she gets teary-eyed. However, the moment new wrestler Logan Lanier is hired, she feels an instant spark between them. Years of celibacy are reawakened with just a glance or casual touch from Logan.

Professional wrestler Logan Lanier is an up-and-comer within the UEW ranks and has worked extremely hard to make it into the wrestling big leagues. Meeting Lexi is the icing on the cake as far as he is concerned. Knowing her past, he realizes that he has to earn her trust and respect in order to make a go of any kind of relationship, especially since he demands ultimate control in the bedroom.

The wrestling world is like a soap opera. A wrestler is given a name, persona and back-story, that completely encompasses his or her life. Good ratings are the primary goal and the upper management at UEW will do whatever it takes to make their show the most popular and successful. Typically, management lets the cast in on the various storylines, however, the present storyline involving the kidnapping of Lexi, in only known by the wrestling tribunal and the powers above. Lexi’s good friends have no clue what is actually going on, and as a result the future of the UEW is now at stake. Also, Lexi and Logan’s relationship is moving along and it is hot, hot and hotter. Hopefully, they will both have their careers in addition to each other once the storyline concludes.

This is an interesting book. The love scenes are well-scripted and hot. The evolving heat between the two main characters, Lexi and Ryan was a little choppy in the beginning and it was difficult to feel their connection. I found it challenging to follow the storyline at times and had to go back and reread a section or two to ensure I understood what was going on. The secondary plot about the kidnapping, while emotional, did not make any sense and was a total turnoff.

Content with her life as an Ultimate Extreme Wrestling Vixen. Lexi Blackwell isn’t looking for love. Considered a legacy in the business because of her legendary father, she’s well respected and liked by many. She has only one focus and that’s her career. Years ago she fell in love with a fellow UEW supersstar only to suffer a lot more than just a broken heart. Unable to completely recover from the hurt, Lexi swore never to travel down that path again.

Professional wrestler Logan Lanier is a rising star in the company. He’s spent years working to reach the top and excels at everything he does. Once in the big leagues Logan quickly realizes just how lonely the existence can be. Feeling a connection with Lexi, he sets his sights and his heart on the pretty little vixen. He knows she’s been burned before and is determined to do whatever it takes to prove that not all men (or wrestlers) are created equal.

Can Logan win her trust and ultimately her love, or will the cruel hand of fate strike again?

« REVIEW: A Deal with Di Capua by Cathy Williams
REVIEW: A Weaver Beginning by Allison Leigh »
Comments are closed.