Lick by Kylie Scott begins with Evelyn and David waking up married in Las Vegas. 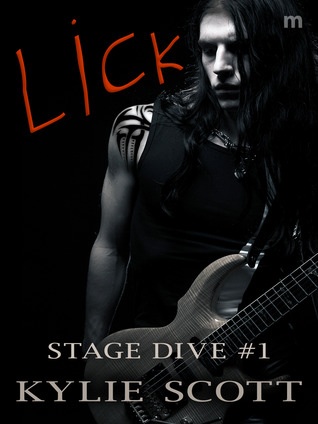 “Let me get this straight, you don’t remember anything?”
“No,” I said, swallowing hard. “What did we do last night?”
“We got fucking married.” he growled.”

“Lick” being the first book in the Stage Dive series was quite good. I really couldn’t help but fall in love with the hardcore rock guy with tattoos that anyone could love!

I was surprised by the fact that everything in this book was so realistic and grown up. The characters were amazingly mature and they had a chemistry that spoke volumes of Ms. Scott’s writing. Evelyn and David’s relationship does have its bumps. Which definitely added a sense of reality to “Lick”

“I… actually, I’d like to be alone for a minute.”
He made a growly noise and suddenly his arms wrapped around me, pulling me in against him. He caught me off guard and I stumbled, my nose bumping into his chest. It hurt. But he smelled good. Clean, male, and good. Familiar. Some part of me remembered being this close to him and it was comforting. Something in my mind said ‘safe’. But I couldn’t remember how or why.”

If you are a fan of musically themed books, that has mature characters that know how to work through their problems, and just one great steamy relationship. I would definitely recommend you delve into the Stage Dive series, for it is one like no other.

Waking up in Vegas was never meant to be like this.

Evelyn Thomas’s plans for celebrating her twenty-first birthday in Las Vegas were big. Huge. But she sure as hell never meant to wake up on the bathroom floor with a hangover to rival the black plague, a very attractive half-naked tattooed man, and a diamond on her finger large enough to scare King Kong. Now if she could just remember how it all happened.

One thing is for certain, being married to rock and roll’s favourite son is sure to be a wild ride.