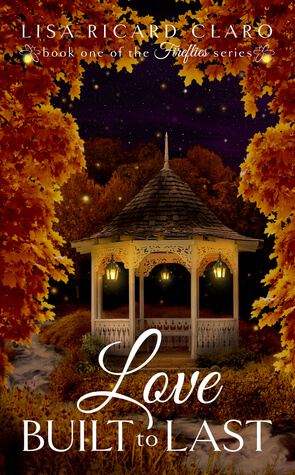 In Love Built to Last (Fireflies #1) by Lisa Ricard Claro , 4 years after the death of her husband Maddie is still struggling to move forward and to let go of guilt. She takes comfort in talking to him and the messages she receives from him. When she meets Caleb, who she is sure Jack wants her to use to remodel her kitchen, it’s either fate or coincidence…but the unexpected attraction for both of them is real. Both of them are conflicted and both have issues to work through, but slowly they come to trust their feelings and one another. When a major setback pushes them apart, both of them will need to decide if love is worth the risk.

Love Built to Last is a powerful second chance at love story with two strong memorable main characters. They’ve both suffered loss, and they are both carrying on in their own individual ways. I liked the dual POV Lisa wrote in, and I felt like I got to know both Maddie and Caleb well. They were believable and their feelings and actions were relatable. I liked Maddie. Her struggles were more pronounced, but as the plot moved forward I felt hope for her as she became more empowered. Her journey to move on definitely pulled at my heart. Caleb struggles too, but his are more subtle and I felt like it was only because he had his son to raise, he was able to see the future a bit more clearly. I liked Caleb and Maddie together. Their relationship is slow to evolve and that’s what works in this story. I could feel the connection between them as much as I could feel the inner conflicts they faced.

I loved all of the secondary characters! Maddie’s in-laws especially. They were supportive and protective of her, but at the same time were prodding her forward. I liked how this family was, how strong they are, and how they don’t pussy foot around when it counts! Caleb’s son is a big part of Love Built to Last, as is Jack, Maddie’s deceased husband. Jack’s role is a very unique and interesting one, and I enjoyed how this was done right up to the conclusion.

Love Built to Last gives a hopeful feeling and gives a lot of insight into the guilt and sadness surviving family members feel, the difficulties faced, and how they cope. Relationships of past, present, and the future are all neatly woven into Love Built to Last. My heart laughed, melted and teared up while reading this well paced book.

I’d recommend Love Built to Last to any romance reader!

LOVE BUILT TO LAST is a contemporary romance featuring two people who have suffered the pain of devastating loss, and must learn to love and trust again. Based on the award-winning short story, Fireflies, this novel is the first book in the Fireflies series.

Maddie Kinkaid believes her late husband, Jack, gives her advice on everything from ordering a pizza to hiring a carpenter, so when she finds Caleb Walker’s business card on Jack’s desk, she’s convinced that he’s the guy to remodel her kitchen.

Caleb is a single father, and protecting his young son means avoiding romantic entanglements. But there’s heat in every kitchen, and sparks ignite between Caleb and Maddie—until disaster strikes.

As Jack goes silent and Maddie’s guilt consumes her, it looks like Caleb and Maddie will never find their happily-ever-after—at least, not without a little help from Jack . . .

« REVIEW: Return to Silver Bay by Lara Van Hulzen
REVIEW: After the Hurt by Shana Gray »