In Mai Tai For Two by Delphine Dryden, Julie is over-the-moon excited to have won an all expenses paid trip to Oahu, Hawaii. The best part? Her best friend Amanda is going as her guest and Julie’s “work husband” and BFF Alan is also going. Julie is toying around with the idea of having an island fling to complete her experience in paradise. But 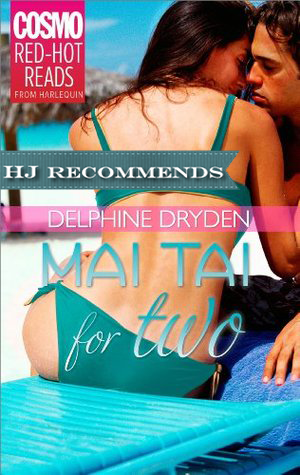 being around Alan poses a problem. Ever since they had a drunken kiss at the company Christmas party, she’s been hiding a crush on him. But she doesn’t think he feels the same way. So when Alan starts to act enamored with Julie, she has to decide if she should go for it, or strictly remain friends.

‘He kissed her, lingering. It was more affectionate than passionate, and tears pricked her eyes as she thought again how she’d miss it if they screwed this up.’

Alan is trying to keep his cool, being so close to Julie while she walks around in a skimpy bikini. He should be thinking of her as nothing more than a great friend…not as girlfriend material. She’s forever making jokes about him being like a dorky brother to her. But he wants to change that, and the romantic setting might just work in his favor. Beginning with their dance the first night of their stay, Alan does everything he can to prove to Julie that they’re right for each other. He can only hope it’s enough to make her his own, and for longer than their few days in Hawaii.

‘He’d never felt anything as true as the way they fit together. She felt like home. And man, did it ever feel amazing to finally be home.’

Mai Tai For Two was a rollicking tropical romp of a novella, featuring best friends who have secretly been crushing on each other for a long time. Bring on the sun & fun!

Could there be a more romantic setting than Hawaii for a story like this? I can’t think of too many. An island getaway was the perfect backdrop for friends Julie and Alan to finally give in to their feelings. And give in, they did. To say there were sparks between them is an understatement. I thought they were a very cute couple–once they decided to see where things took them. Julie and Alan were always laughing and teasing. They had a wonderful connection that they both, understandably, worried about losing if their romance didn’t work out.

Even though Alan and Julie were the main focus of the novella, her best friend Amanda plays an important role, trying to figure out her love life as well. Her character added another female viewpoint to what Julie was going through and I liked that they had each others backs when it came to the men in their lives. The characters overall were very solid, well thought out, and seemed realistic. And I have to say I really liked the dance scene with Julie and Alan, the first night they were on the island. Fun and mega sexy!

Author Delphine Dryden did a nice job with this friends-to-lovers adventure. If you’re looking for a quick summertime read, I’d recommend giving this novella a try.

Published May 13th 2014 by Cosmo Red Hot Reads from Harlequin

You and your “work husband” have just won an all-expenses-paid vacation in Oahu. Now the fun begins…

1. Get lei’d. (With flowers, obvi.)
2. Settle into your gorgeous ocean-side cabin. Contemplate living in Hawaii forever.
3. Become overwhelmed with hideous unexplained jealousy when your bestie decides to make sexy moves on your work husband, Alan.
4. Dismiss jealousy. After all, you’re not interested in Alan “that” way…are you?
5. Avoid joyous dancing when bestie’s ex arrives and sweeps her off her feet�leaving Alan completely and totally available.
6. Now you’re alone with Alan. Alone. In paradise. Take a deep breath, have a mai tai�or two�and (gulp!) make your move. Be classy.
7. “Accidentally” let Alan peek under your grass skirt.
8. Take off grass skirt.
9. Do Incredibly Naughty and Sexy Things everywhere.
10. And do not think about what happens when you and your work husband go back to reality….

2 Responses to “REVIEW: Mai Tai For Two by Delphine Dryden”