Marriage Behind the Façade by Lynn Raye Harris is an intensely passionate re-union story about a couple on the brink of divorce. 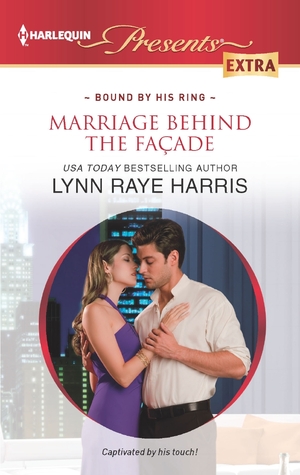 Sydney Reed and Sheikh Malik of Jahfar had a world wind romance leading to a hasty marriage. But no sooner were they married the doubts set in. When Sydney overhears Malik’s coversation with his brother regretting their hasty marriage it’s the final straw and she leaves him to return to California and her family.

Having not heard from Malik in a year, Sydney decides its time to move on with her life and files for divorce.

When Sydney left, Malik’s pride got in the way of following her home, but when he learns that Sydney plans to divorce him he decides its time to take action and comes up with an ingenious plan.

Malik shows up in California telling Sydney that she must live with him in Jahfar for 40 days per Jahfari customs before their divorce can be finalized.

Once Sydney is in Jahfar Malik introduces her to the Jahfari way of life, the time they spend in the desert begins to heal old wounds and rekindle new passions.
But Malik is a man of action…and Sydney is a woman of words and that right there is the crux of their relationship problem.

“Dramatic? I said I love you and that’s dramatic?” Her eyes stung with emotion. With pain. He wanted to marginalize her feelings for him and she hated it.
He jerked his trousers closed. “Do you want me to say I love you, Sydney?” His eyes flashed, his chest heaving as he stared at her. “Would that make you happy?”
He leaned forward and caught her chin, forced her to look at him. “I love you,” he said, though it came out as a growl. “Is that what you want to hear?”
She pushed his hand away and huddled near the door as the sand pelted the SUV. “No,” she said to the glass. “Because you don’t mean it.”
His laugh was hollow. “And you said the words were important.”

I really loved this story, it made realize that sometimes actions do speak louder that words…we place so much emphasis on words that we tend to overlook the finer things in life.

I loved the characters in this book, they were beautifully penned. Marriage Behind the Façade is a beautiful desert romance; passionate and emotionally charged. If you love a great re-union story this is a must read.

Book 2 in the Al Dhakir Brothers series! — (Strangers in the Desert is Book 1)

Sydney Reed dreamed of being a princess in a faraway land, and couldn’t believe that smolderingly sexy Sheikh Malik of Jahfar would marry plain old her–even out of convenience. But the dream has ended and she’s back to reality with a thud!

Now Sydney needs his signature on the divorce papers–Malik, however, has other ideas. Jahfaran law requires that they spend forty days together as man and wife before Sydney can be free of him forever. Out in the scorching desert, Malik holds all the power–he’ll make sure their forty nights are more than worth it….