Midwife’s Christmas Proposal by Fiona McArthur: Tara grew up in foster homes and orphanages. She isn’t used to having a family or celebrating the holidays. Now that she’s an 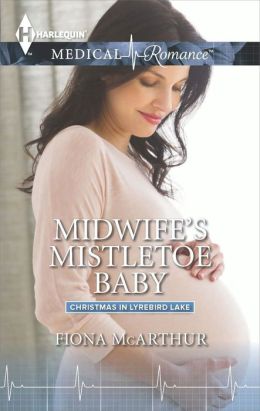 adult, Tara has found a home for herself in Lyrebird Lake. Tara plans to continue working as a midwife and enjoy living life to the fullest on her motorcycle.

Simon is a dedicated, passionate OB who will stay with his family in Lyrebird Lake over the holiday he waits for his sister, Maeve, to have her baby. Simon can be a workaholic who can’t seem to maintain a romantic relationship with his preference to be working. He has a few sisters and he is very protective of them.

Simon and Tara are drawn to each when they meet. Simon’s relatives also have a way of throwing them together in a matchmaking effort. In many ways, Simon and Tara are opposites. Tara is a thrillseeker as a way to affirm that she is alive and making the most out of her life. Simon doesn’t like to take risks. When Simon realizes how many “normal” childhood experiences that Tara has missed out on, he makes it his mission to ensure that she gets those experiences.

The following Saturday was Tara’s birthday. She hadn’t mentioned it, so he hadn’t, but he’d quietly arranged a cake at the place where they were going to breakfast after the jump.
He’d learnt something as a brother of four plus two sisters. Women loved surprises.
He didn’t even know why he was looking forward to Tara’s adventure when he hated the whole concept of risk, except now he wouldn’t miss it because it involved Tara. He hoped he wasn’t getting too caught up in the whole Tara fantasy. It wasn’t like it was a date.

While neither Tara nor Simon were expecting to find someone at this point in their lives, they are cautions about beginning a relationship. Simon was only planning on staying in Lyrebird Lake for a relatively short time and Tara moves around. Tara’s background and recent past have a significant impact on her expectations of any relationship with Simon.

She looked at him and he was smiling but whether he was teasing or serious she couldn’t work out. What she could read made her cheeks feel hot. She almost wished he didn’t look at her like that because it was going to be incredibly hard some time in the definite future when the feeling it gave her was lost.
But then her sensible side, the one that said she would survive no matter what, decided that being with Simon was like parachuting-the rush was incredible but the reality was the ground waiting for you. But it didn’t mean you shouldn’t enjoy the ride. This would never last but it was wonderful while it did and from now on she was going to take what was on offer with open arms.

If you enjoy books set in small towns, the Christmas holiday, and a medical theme, then the Midwife’s Christmas Proposal may be a good book for you. As both Simon, Tara, and members of Simon’s family are all in the same profession, there are storylines about pregnancy, birth, birth plans, and C-sections.

The book is set in Australia and I was unfamiliar with some of the slang terms that Ms. McArthur used in the book. Simon and his family have been featured in previous books by Ms. McArthur. It took some time for me to get into the book while I was figuring out the relationships between the characters.

Maeve is a key secondary character, as she is the reason Simon is back in Lyrebird Lake. I found myself more interested in Maeve and her pregnancy, especially once Ms. McArthur revealed the background for Maeve’s pregnancy. Otherwise, I did enjoy the interesting family and background that Ms. McArthur created for Simon.

Midwife Tara Dutton loves her new job and feeling a part of her mums’ special moments. The magical festive spirit of Lyrebird Lake has totally charmed her…and for the first time ever, she’s actually looking forward to Christmas!

Even more charming — but much more dangerous — is gorgeous Dr Simon Campbell. The heat in his eyes promises Tara the future she’s always dreamed of…dare she believe that his Christmas proposal will lead to forever?