In More Than A Soldier by Irene Onorato, Cindy Giordano has been betrayed by her foster sister and her fiancé. Unable to find a job, 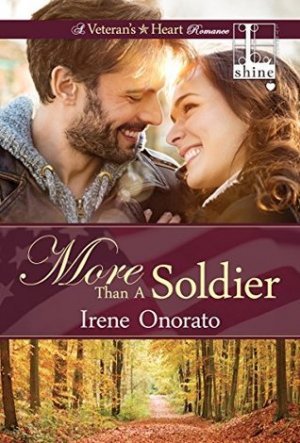 she uses her time off to find her biological brother, Edward. It’s there where she meets former Special Forces solider Hank Fleming, who is Edward’s foster brother. Hank was left deaf in his left ear, missing an eye, and scarred due to an attack in Afghanistan. Both attempt to use their faith to move on, and when it Cindy’s ex starts threatening her, Hank is determined to be the man to save her.

I would classify this as a Christian romance. While it wasn’t overly preachy, it has a lot of tones about forgiveness and what the Lord would want. The example below is from a conversation between Cindy and her neighbor, Mrs. B, about what happened between her foster sister and her fiancé.

You still do. Even with the mountain of anger hiding it from view, you still love her. But you need to forgive her for what she did. The Lord would want that, you know.”
“Easier said than done.” More like impossible for a betrayal of that magnitude.

I had a hard time believing that Hank and his PTSD could be dealt with by simply talking to his unit’s medic, who was also a preacher. Considering he was having nightmares and dealing with survivor’s guilt, I would think he would actually need some professional counseling. But no, they have a brief chat and then Hank’s seemingly better. I felt that issue should have been handled differently. It seemed as if his PTSD could just be swept under the rug. It’s never that easy to treat.

I also had an issue with the way Cindy viewed her foster family. She claims they treated her as if she were one of their own, but then says finding Edward would mean finding a real family. I understand that she would have wanted to find her blood family, but that doesn’t make her foster family any less “real”. I felt that it should have been phrased differently, considering later on in the book Cindy is calling her foster mother “Mom”.

I was a little surprised how accepting Edward was of Cindy. They meet and suddenly he’s offering to help her out financially after learning she lost her job. It felt like he already knew of her existence. I haven’t read the first book in the series, which is Edward’s book, so that might actually be the case. Still, it seems a little odd that he would be offering a virtual stranger that kind of help.

He stopped and blocked her path. “My role as big brother is two days old, but I’ve had a good mentor to show me how it’s done. I can always count on Hank, and he knows I’ll always be there for him. Promise me you’ll let me know if you’re ever in need of anything. And I do mean anything.”

I found the confrontation with the ex to be anticlimactic. I also felt Hank was too hard on Cindy. For all his preaching about how she should forgive her sister, when Cindy needed forgiveness from him he struggled to give it, when his whole reaction to what happened seemed overblown to begin with.

This book wasn’t for me. It wasn’t because it had the Christian overtones–while I don’t often read those books I don’t mind it–but the way certain things were handled just didn’t sit right with me. I wavered between giving this two and a half or three stars, but in the end it was Hank’s struggle to practice what he preached that dropped it down to two and a half.

Former Special Forces soldier Hank Fleming is living a safe, quiet life in upstate New York, but there are days he isn’t sure he’s going to make it. The sole survivor of a devastating grenade attack in Afghanistan, he is still scarred, physically and emotionally. He hangs on to his faith and tries to keep moving forward, waiting for the day that something—or someone—can make him feel whole again.

Cindy Giordano is searching too—for her biological family and a fresh start. When her journey to find her brother, Edward, leads to Hank’s front door, she is instantly drawn to Hank . . . and instantly wary. With her ex-fiancé’s betrayal still fresh in her mind, friendship is about all she can muster.

When shadows from Cindy’s past threaten, Hank’s protective instincts shift into high gear, and he realizes everyone has their own battles to fight. But the road to healing would be much sweeter with the right person by his side . . .

4 Responses to “REVIEW: More Than A Soldier by Irene Onorato”