My Kind of Earl by Vivienne Lorret is the second book in the Mating Habits of Scoundrels series. The series is 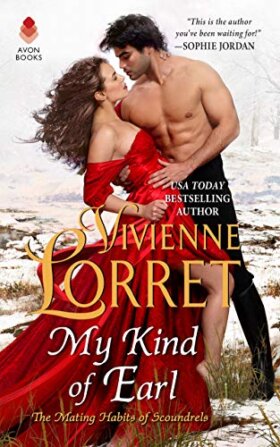 based on three bluestocking debutantes on the hunt for husbands who realize they need a book to guide them on how to recognize when a man is looking for a wife or if he’s a scoundrel wanting to avoid marriage. Realizing there isn’t such a book, they take it upon themselves to make a study of men and write one. But first, they need to research…

Jane Pickerington was on a mission to research the difference between gentlemen and scoundrels and what better place to observe than a brothel? With a plan, a map of the brothel, and a reticule full of surprises, she sneaks into the brothel to find answers for her research. Her plan goes wild when she is discovered, and Raven tries to assist her. While patching Raven up from the night’s adventure, she discovers his birthmark and knows she has seen the mark somewhere before. Her inquisitive nature led her to research the mark and Raven’s history.

Raven was an orphan and had survived his childhood living in the slums of London. He was content with his life; he had a job at a gaming hell and his very own house. Encountering Jane threw his life into chaos. He was sure she was wasting her time trying to search for a connection between the aristocracy and himself, but he couldn’t stop her. Stopping her meant he would have no reason to see her again and if she could prove his connection then he possibly had a chance of being with her in the future.

This has been a series with lots of humor and intrigue. I love all the humor and chaos these bluestockings have created in their research. They are determined to write a book to help other debutantes and their searches have led them to their very own scoundrels to tame. I enjoyed this book and look forward to Ellie’s story and the chaos her research will lead her to.

Jane Pickerington never intended to start a brawl in a brothel. She only wanted to research her book. Yet when her simple study of scoundrels goes awry, she finds herself coming to the rescue of a dark, enigmatic stranger… who turns out to be far more than an average rake out for a night of pleasure. He’s positively wild!

Only the most feral and cunning could have survived foundling homes and work houses. Orphaned as an infant, Raven never had another name. At least… not until he meets her. Now he’s face-to-face with the one person who recognizes the strange birthmark on his arm and can reinstate him to his blue-blooded birthright.

All at once, Raven’s life takes a turn. His knowledge of dark alleys and gaming hells never prepared him for gilded ballrooms. So Jane becomes his tutor. Yet, the more lessons in decorum she offers, the more this untamed scoundrel wants to teach her all the ways to be wicked.

« Spotlight & Giveaway: MY KIND OF EARL by Vivienne Lorret
REVIEW: A Tail for Two by Mara Wells »