Never Seduce a Sheikh by Jackie Ashenden: Lily Harkness was a gold medal swimmer, and a CEO of a major oil company and she was in Dahar to make an oil deal, a big one. However life was different in Dahar and things she thought she had buried seemed to 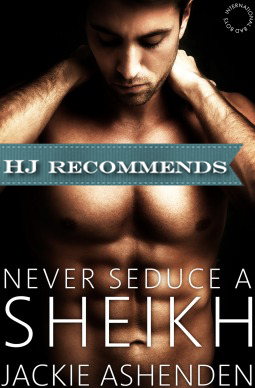 Sheikh Isma’il ibn Khalid al Zahar was determined to rid his country of his father’s legacy. A bitter, evil and destructive man Isma’il was terrified his father’s DNA filled with those lovely things had somehow tainted him. Isma’il just wanted what was best for his country, his people, an oil deal would help. What he wasn’t counting on was this western woman who stirred everything in him.

These two scarred and scared people didn’t know why fate had brought them together or how explosive their relationship could be, only that once they started down this path they were destined to follow. Now the only question is as things start coming to the light will they be burned together forever or be half way around the world from one another?

How deep into the darkness will she have to go to help bring him into the light?

Oil baronness Lily Harkness isn’t so much steel magnolia as titanium cactus. She’s used to living in a man’s world and when she plays, she plays to win. She wants exclusive oil rights to ensure her company remains at the top and she’s not walking away empty handed.

Sheikh Isma’il al Zahara rules his country his way. Always in command, he has his own plans for his country’s oil and it’s not just about the money. But he’s intrigued by the buttoned up business woman who’s come to his country to strike a deal. He can’t help but wonder what’s beneath her icy facade.

Lily’s desires are buried down deep, but her attraction to Isma’il is too strong to deny. Will seducing the sheikh cost Lily her body and her soul?

4 Responses to “REVIEW: Never Seduce a Sheikh by Jackie Ashenden”