No Foolin’ by Lisa Scott: I’m in the middle of the road on this one. I really enjoyed the book but there were a couple of things about it that REALLY bothered me. Let me see if I can figure this out… 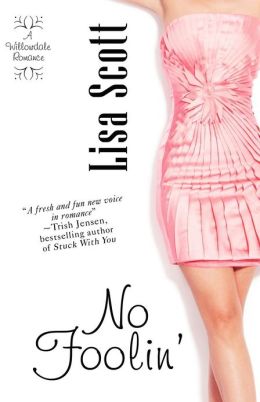 Ok, so I liked the heroine, Kate, well enough. She’s in a small town in North Carolina, just trying to keep things together. Her mom died and she’s left with her no-so-helpful stepdad and her hormonal stepsister, Dina. Dina is hormonal because she’s pregnant but won’t tell anyone who the father is. Drama Mama!! Although when we first see Kate and Dina together, they don’t look like they get along but as the book progresses, I really liked how they are together. Anyway, the reason I liked Kate is one of the reasons that I liked the relationship between Kate and Dina: everybody depends on Kate without knowing that they depend on Kate. Kate’s trying to keep the household afloat and keep them from losing the house altogether and she’s doing everything she can to help their family, not just with money but also with moral support, especially for Dina. She has a lot on her shoulders and pretty much asked for none of it. So I really felt for her. Then, when things aren’t looking so good, something… someone comes along and throws a monkeywrench into all of it!

That monkeywrench is named Teague. He’s an up and coming movie star who is about to hit the big time. But he has this little tiny secret that could possibly end his whole career. That secret is the reason for Teague’s visit to Kate’s hometown. But when he’s spotted by some paparazzi, he has to ask Kate to rescue him. One thing leads to another and they are both caught in a lie that’s grown to gargantuan size! It’s actually pretty funny! But, as you may have guessed, Teague is not your typical, shallow movie star. He has some personal issues to say the least. It seems to all come from the fact that he was given up for adoption when he was 2 years old. He feels like his mom and dad just sort of threw him away and he’s never let anyone close since then. I thought Teague’s train of thought was a little wonky but when someone has issues that go back to childhood, there’s usually no point in trying to make sense of them. Either way, Teague is known as a love ’em and leave ’em guy and he’s just fine with that image, even if he DOES wish for more.

I think Kate and Teague are perfectly matched, especially since they BOTH believe that they are not destined to fall in love. Teague thinks that it’s because he won’t let anyone get close (which is true) and Kate thinks it’s because it’s just not in the cards for her. It was a lot of fun to watch each of them fight against the attraction they have for each other. Later, it was even better to see them denying that they were falling for each other. This book is ALL about denial!! LOL! Oh! One other thing: there’s this side story of Dina and her baby’s daddy that was cute and fun. I loved seeing them together and it was one of the things I really liked about this book.

But I did have a couple of problems with this book. First, is the stepdad The way he neglects his daughters (Kate and Dina) is practically criminal and I pretty much hated him from the beginning. I hated him even more as the story went on. My second (and last) issue was the hokey-ness of the whole book. I get that it’s called “No Foolin'” and that the author dropped the “g” on foolin for a reason. But seriously? People in the south don’t REALLY talk like that, with the Aw Shucks and Gee Whiz and constantly dropping the “g”s. Plus, the local eateries are called the Jelly Jar diner and the Kissin’ Cousins diner? You have GOT to be  kidding me. I’m sure that somewhere in the sticks, there’s restaurants with ignorant names like that but do we really need to put that in print? I mean, it felt more like perpetuating a stereotype than anything else and that drives me nuts.

Overall, this was a pretty good book. I liked it! Small town southern girl goes to Hollywood on the arm of a big Hollywood star? Heck yeah! Lots of secrets and lies, where even the secrets have secrets!! You’ll get some laughs and maybe a couple of tears but you’ll certainly have some fun. I think anyone who likes contemporary romance will like this one

Publication Date: November 28, 2012
Welcome to Willowdale, North Carolina, a small town where the folks are friendly, the romances are as sweet as the tea, and the biddies at the diner gobble up gossip like it’s peach cobbler. This may be their biggest scoop ever.When sexy Hollywood bad-boy Teague “T-Rex” Reynolds comes to this quiet Southern town, he needs a fake girlfriend to hide the secret that brought him there. School nurse Kate Riley takes the job, but she won’t fall for a movie star, no ma’am. That’s fine with Teague. He hung a closed sign on his heart years ago.Convincing the press they’re in love is one thing. Fooling each other they’re not is getting harder each day. Despite scandal, heartache, and misunderstandings galore, they might just find the sweet thrill of true love. Book one of The Willowdale Romances.Lisa Scott is a former TV news anchor who now makes up stories instead of sticking to the facts. Learn more about where her ideas come from and what’s on the way at ReadLisaScott.com