One Night in Provence by Barbara Wallace: A once in a lifetime trip doesn’t start out like you planned, so what? Wing man dips out, you got 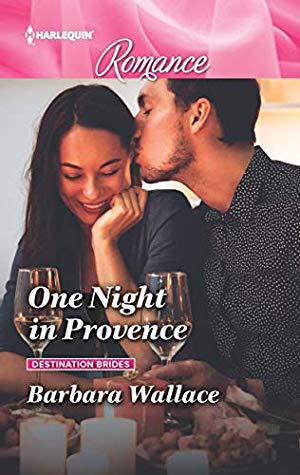 this! The most handsome man you’ve ever seen in one of the most luxurious places you’ve ever been? This might be a problem.

Jenna Brown was usually pretty level headed when it came to men. She had seen it all, or so she thought. She was determined to have a great vacation though and it was going to be all she had planned and more even if it was already turning out different than anticipated. This was going to be her adventure and her time to break free, for a week anyway.

Philippe d’Usay didn’t understand what was drawing him to this American and yet something was. Maybe it was the time of year, maybe it was her, or hell maybe it was just the fact that right now he needed a distraction. He didn’t know, but what he did know was that she was not just going to walk away from him. There was something between the two and he was going to figure it out.

Jenna and Phillippe knew something was going on between them, but would it just be a vacation fling? Or was there really something more that could be?

Ms. Wallace has given her readers another interesting getaway romance in this quartet. It can be read entirely on it’s own though as very little is referred to with the others. This is an interesting read and to be honest may take a second read for a decision on it. The characters are so easy to get involved in and make you feel for them. The bigger issue isn’t theme it is actually the story line itself. There are some interesting points and overall it’s good but there are some parts that might have you scratching your head. Also overall the landscape at parts is incredibly vivid and you can smell the grounds and sometimes it’s as if it didn’t exist. After the first read through it was amazing, but then once it sits it’s hard to make that same judgment. If it was Ms. Wallace’s point to have it be reread she has done an amazing job. ☺

Can an unexpected affair…

…lead to a lifetime of happiness?

In this Destination Brides story, while on vacation in Provence, homebody Jenna Brown embarks on a no-strings affair with a handsome stranger. But there’s more to wealthy playboy Philippe D’Usay than meets the eye. Scarred by loss, Philippe’s committed to being alone. But after their Provençal adventure ends, and Jenna discovers she’s pregnant, they must decide if their short-term connection could become a life together forever!

3 Responses to “REVIEW: One Night in Provence by Barbara Wallace”