In One True Love by Lori Wilde, Millie Greenwood meets John Fant for the first time when he arrives at her family’s humble home to deliver devastating news. She is instantly struck by his rugged good looks and kind eyes but knows better than to act on her attraction to him because of her station in life. His family owns the silver mine Millie’s father works in and John was there to inform her and her mother that her dad passed away in a cave-in at the mine. Millie holds the family together and makes it through the funeral somehow. The Fant family was in attendance and John’s sister 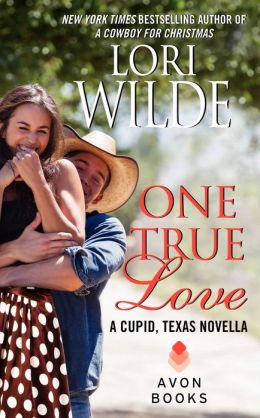 Penelope asks Millie if she would be interested in working for her as a maid with a generous wage to share with her mother and siblings. Millie decides this would be the best way to take care of her family and get a taste of freedom as well.

“I loved my mamma and my brothers and sisters with all my heart, but this was a chance for me to get out and see something of the world. Spread my wings. Start my own life.”

Millie falls into the routine quite easily and gets along well with everyone in Penelope’s household. She’s a bit homesick at first but work keeps her mind occupied along with glimpses of John who lives next door in his parent’s home. He’s just as kind to her as he was in their first meeting and Millie sees a sparkle in his eyes whenever he looks at her. She learns the history behind the towns name of Cupid when she visits the caverns with a friend. When she sees the Cupid formation for herself and hears the legend about the outlaw whose prayers for true love to save him came true, she is awestruck. John happens to be heading home on horseback as she is walking back after her trip to the caverns and offers her a ride. There is a pull between them almost like electricity during their ride and Millie knows in her heart he is the man meant for her although it can never be realized. They are just from too different social classes to hope it would ever work out.

“John Fant was my one true love and there was no way in the whole wide world that we could ever be together.”

She tries to ignore he feelings and steer clear of John as much as possible until they are thrown together for a fundraiser at the last minute. The time they spend together only increases their longing. He makes a confession that his is betrothed to another woman and although he is fond of her, it is nothing like what he feels for Millie, but even he knows it cannot be. With his wedding date looming shortly, Millie throws herself into her work to get over her heartbreak. In desperation she writes a letter to Cupid and delivers it to the caverns in hopes that somehow she and John can find a way to be together.

One True Love is the short story that explains the origins of Lori Wilde’s new series Cupid, Texas. Set in 1924, she does a wonderful job keeping this touching romance authentic. She describes Millie’s feelings regarding the distinction of social classes so well that it is easy to understand how heartbroken she would be to fall in love with John. I enjoyed how Lori also mentioned other historic facts such as women recently earning the right to vote and the buzz around music and dancing in the mid-twenties. This is a great way to start off a new series and I look forward to reading about the current romances happening in Cupid.

In Cupid, Texas, they say everyone has one true love. And if you write a letter to Cupid, you will get an answer in return . . .

Now, from New York Times bestselling author Lori Wilde, read how the legend of Cupid began . . . All it took was one great love story!

Too bad for pretty young housemaid Millie Greenwood that her one true love is John Fant, the handsomest, wealthiest man in town. But in 1924, a maid—no matter how lovely—isn’t about to marry into the town’s foremost family, and John is on the verge of becoming betrothed to another. Everything seems hopeless until Millie writes a desperate letter to Cupid, and the most romantic legend of all is born . .

« REVIEW: The “What If” Guy by Brooke Moss
REVIEW: The Look of Love by Bella Andre »
Comments are closed.