In The Look of Love (The Sullivans #1) by Bella Andre, When Chloe Peterson ends up in the ditch in Napa Valley on an a stormy, rainy night, she never expected to have a veritable knight in shining armor come to her rescue. It’s been her experience that men only end up hurting you: verbally, emotionally and unfortunately sometimes physically. She is running from her ex-husband when she goes off the road and meets Chase Sullivan. He offers to give her a ride and even saves her from getting run over before she trusts him enough to get in his vehicle. Chloe is surprised that somehow after what her ex has put her through recently, she finds herself quite attracted to Chase. But when he takes her to his brother’s wine estate instead of 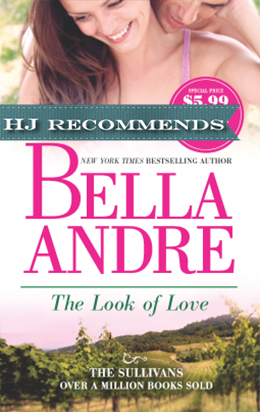 dropping her off at a motel like she asked, her defenses instantly go up. She expects that he’ll try to take advantage of her once they’re alone, however he remains true to his word and tries to make her feel safe. Chloe and Chase share an extremely heated moment that night when he accidentally walks in on her in the bathtub and something changes in the chemistry between them. Their simmering attraction becomes an inferno and from then on they can barely keep their eyes off one another.

“Attractive was a paltry word for a man like this. Even in the dark, she could see that he put other men to shame. Even in the cold rain with his hair and clothes plastered to his skin and several streaks of mud across his cheekbones, he was utterly gorgeous.”

Chase is a photographer and is at his brother’s estate for a photo shoot so he asks Chloe to stay and watch while he works. It isn’t long before Chase’s crew and his brother Marcus notice the tension between them. Chloe doesn’t trust herself enough to let Chase get close to her emotionally, even after going out of his way to be honorable, so she finally gives in to her physical attraction to him instead. But the heat of their passion only increases with every moment they spend together and she feels herself becoming more and more dependent on his touch and his presence. She had told herself after leaving her ex that she would become an independent woman and stand up on her own two feet. But will it mean giving up her independence to explore a relationship with Chase or will it make her a stronger person to become part of his life?

“Chase Sullivan hadn’t realized that tonight his life was going to change forever. But it just had. And, amazingly–shockingly–he wasn’t the least bit interested in fighting that change. Instead, he was gearing up for a different fight altogether. The fight for Chloe’s heart.”

Chase Sullivan was headed to his brother’s wine estate guesthouse while on the way back from their mother’s birthday party when he notices a car sitting precariously in the ditch. Then he sees a woman standing out on the edge of the road in the downpour. He knows from the moment he starts talking to her that this woman has been hurt before. Having two sisters of his own, he realizes he needs to be gentle and honest with her when he tries to help her to safety. Chase knows his brother’s estate is closer than any motel and that Marcus would insist that Chase bring her there to dry off and call a wrecker. Once he explains the situation and she calms down, he can tell she’s not used to being treated nicely or honorably. And he can also see the bruise on the side of Chloe’s face. It brings out a fierce protectiveness in him that he’s never felt before and he can’t believe how strong his reactions are to this woman he just met.

Chloe doesn’t want to open up about her past or what she’s running from. Chase understands that she needs to trust him first and he sets out to prove to her that he will never hurt her. He takes every opportunity to make sure she’s comfortable and taken care of while she stays at the estate recuperating. He even helps her gain some self-confidence back when he has her help out behind the scenes at the photo sessions. With every small victory she has, Chase falls further in love with Chloe. He can tell it’s happening too fast but he also knows what he feels is genuine. Only he’s not sure if she can handle hearing about the depth of his feelings for her until she moves past whatever it is she’s hiding. Once she finally allows him to get closer to her, Chase knows then he can win her heart.

Bella Andre has written an absolutely heartwarming story that made me want to sigh and cry happy tears. My heart went out to Chloe for everything she’s been through in her relationship with her ex. Chase is exactly the kind of guy she deserves to find a HEA with: he’s protective, sexy, honest, will treat her like a princess, sexy (did I mention that already?) and loyal. His mama certainly raised him right. I loved their dialogue back and forth, both in their moments of raw honesty and in their flirtatious conversations. Bella also did a great job with the love scenes. There is just enough heat to keep it steamy but it is also fun and romantic. I can’t wait to start book two in The Sullivans series.

Sometimes one look is all it takes

Chloe Peterson has vowed never to make the mistake of trusting a man again. Her reasons are as vivid as the bruises on her cheek. So when her car skids off a wet country road straight into a ditch, she’s convinced the gorgeous guy who rescues her must be too good to be true.

As a successful international photographer, Chase Sullivan has his pick of beautiful women. He’s satisfied with his life—until he finds Chloe and her totaled car on the side of the road in Napa Valley.

With every loving look—and every sinfully sweet caress—the attraction between them sizzles, and Chloe can’t help but wonder if she’s met the man who may be the exception to her rule….

3 Responses to “REVIEW: The Look of Love by Bella Andre”