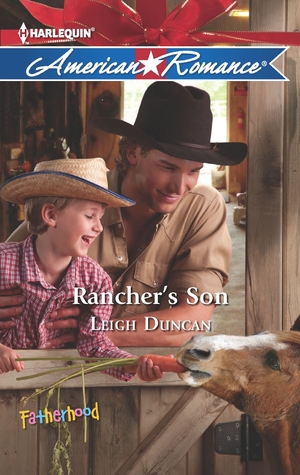 Sarah Magarity just broke the first rule of social work: don’t get personally involved. But how can she ignore the orphaned tyke who shows up in her office on Christmas Eve? The chance to make a difference is awfully tempting.

So’s the rancher with the sexy smile who might be the boy’s father. Still, Sarah has to be nuts to let Ty Parker sweet-talk her into a cattle drive across rugged Florida wilderness.

Ty can’t believe he might have a son to carry on his legacy. Still, until the DNA results come back, he isn’t making any plans. But a strange thing happens on the open road. Amid rattlesnake scares and cozy campfires, he’s growing closer to the boy…and to Sarah, the fiery redhead Ty can’t keep out of his arms. They could be a happy family, unless the truth tears them apart….

A sweet American romance that will steal your heart.

On Christmas Eve Sarah Magarity is the only person in her office. She doesn’t expect anyone to drop by, especially not a woman dropping off a little orphaned boy. Now it’s up to her to find his father and demand that he takes responsibility for his child. That is until the name in the birth certificate names the man she had problems the year before when he tried to start a big brother, which turned out to be a big failure with the first batch of foster kids. Now she will make sure he takes his duties seriously and make sure that he will be unto the task of caring for a small child.

Ty can’t believe that he is the father of this little boy. He won’t accept it until he sees a DNA test proving it. Considering his ex-wife left him during his most difficult time and that she never contacted him to let him know she was expecting a child, he believes the kid is another man’s biological child.

Jimmy is a five year old who just lost his mother and has not known any father in his entire life. As he finds himself in at the Department of Children and Family Services he only want to make sure he hasn’t missed Christmas, so he can give Santa his wish list, he doesn’t want any toys, he just wants his mother back.

As he steals Sarah’s heart she will break many rules trying to bring him happiness. Even spend time with the rancher that makes her feel things that she had not expected or want. Now as Sarah and Ty spend time together they find love, but will the happiness of a child bring them together or drive them apart once Jimmy’s true paternity results comes to light. One or both of them will have to make changes to their lives if they want to bring Jimmy happiness otherwise he will be stuck in foster care for the rest of his young life.

I know that the story revolves around the romance between Ty and Sarah, but Jimmy is a great part of the story and he stole my heart with his cuteness. This trio might just steal your heart too if you let them.

The story is profound and has some secrets that might just surprise you too.

« Review: Under Her Spell by Eliza Daly
A Loveswept Classic Review: Nights in White Satin by Linda Cajio »
Comments are closed.