Reason to Believe by Gina Gordon: Ben and Grace have a raging attraction, but not only are 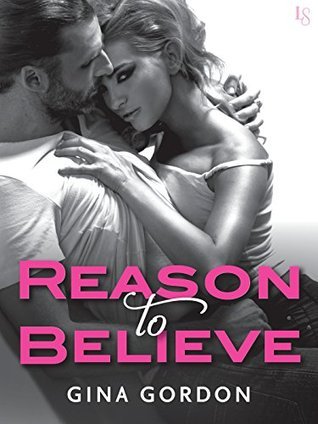 After leaving her escort service behind, Grace is now ensconced in the corporate world as a consultant. Even loving it, she fears the longer she works at a firm the more likely she’ll meet someone who knows of her past.

The second in the White Lace series, it can be read as a standalone, but I do know I wish I had the background of the first story. I’m definitely going to read the first, and any others in this series now though. I wholeheartedly enjoyed Reason to Believe despite my iffy start.

Grace Nolan is doing her best to conform to the rigid corporate world and put her history as a paid escort behind her. And even after seeing the worst that men have to offer, she still hasn’t given up on finding love with the right guy. But right now, Grace could use a distraction to take her mind off her nonexistent love life. The trouble is, giving fashion advice to a former fling with rock-hard abs and a bad-boy attitude isn’t exactly what she had in mind.

After working his way up from cameraman to vice president of an adult media company, Ben Lockwood is floundering. While he reevaluates his future, he asks the most poised and polished woman he knows to make him look respectable. Ben even swears off sex, which makes spending time with Grace pure torture. It’s only a matter of time before they give in to the heat—but unless Ben confronts what his heart has been denying, they may both get burned.

3 Responses to “REVIEW: Reason to Believe by Gina Gordon”