Roman and Jewel by Dana L. Davis: Place your helmet firmly on and climb aboard this crazy adventure 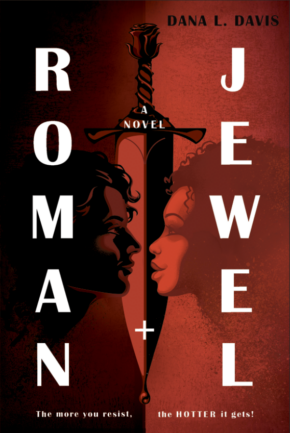 ride that will have you laughing and simultaneously sighing in a matter of chapters. Roman & Jewel, the latest Broadway production based on a conceptualised reincarnation of the original Shakespearean Romeo and Juliet, just sometime in the now, aims to highlight that Shakespearean themes, particularly the nature of destiny and true love, are literally timeless. In fact, what is made abundantly clear throughout is, irrespective of context, love will always find its way despite the roadblocks that are created to try and destroy it.

Beginning with her 8th audition, Jerzie Jhames is horrified to learn that she has been upstaged by ‘big name’ performer Cinny, and so rather than land a role in the production, even a minor one, she is devastated to learn that whilst the casting crew believe she is the most talented and certainly the most perfect Jewel, that big names put bums on seats and cash in production wallets and thus, she is delegated the role of Standby. For Jerzie, this is definitely not a dream come true, and whilst there are perks to standing by, like meeting her hero Cinny in the flesh, she realises that she is going to need her wits about her if she is going to get through the full pre-production phase. Like a literal blow to the head, Jerzie falls madly in love with Zeppelin, aka Roman, day one of the rehearsals, and what becomes quickly evident, is their natural chemistry and natural talent are the elements that may make or break the production if Cinny and her hoards of fans have anything to do with it.

Like a cold drink on a hot summers day, Roman and Jewel was instantly refreshing. Both the central and minor characters were perfectly motivated and their backstories appropriately explored to ensure every action kernel made sense wherein their behaviours were justified and plausible. Tension throughout was managed craftily and whilst some heavy concepts were dabbled in, the tone remained surprisingly light and relatively innocent, perhaps in part due to the hilarious scenes that featured Aunt Karla; the perfectly drawn Aunt whose natural rebellion and strong sense of self was simply fun to encounter.

Clever, witty, thematically clear and perfectly paced, Roman and Jewel was fun in every conceivable way and as one adventurous moment leads to another you’l find that even if you aren’t familiar with the worlds most frequently told love story, it makes little difference, because true love always finds its way to shine brightly. And whilst our pre-destined lovers are of course surrounded by challenges, truth, loyalty and family are the cornerstones that keep them safe and enable them to flourish together. I highly recommend you gulp this one down, because without a shadow of a doubt, you are sure to find yourself smiling and satisfied and no doubt keen to line up for the next Broadway production whenever you are next in town.

Jerzie Jhames will do anything to land the lead role in Broadway’s hottest new show, Roman and Jewel, a Romeo and Juliet inspired hip-hopera featuring a diverse cast and modern twists on the play. But her hopes are crushed when she learns mega-star Cinny won the lead…and Jerzie is her understudy.

Falling for male lead Zeppelin Reid is a terrible idea–especially once Jerzie learns Cinny wants him for herself. Star-crossed love always ends badly. But when a video of Jerzie and Zepp practicing goes viral and the entire world weighs in on who should play Jewel, Jerzie learns that while the price of fame is high, friendship, family, and love are priceless.

« REVIEW: V Is For Valentine by Jeannie Watt
Spotlight & Giveaway: A Case for the Candle Maker by Candace Havens »
Comments are closed.