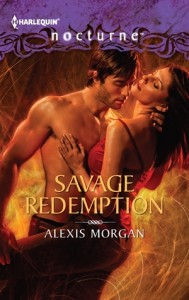 Just when he’s getting his life back on track, the woman responsible for ruining it arrives—in jeopardy—on his doorstep.When gunfire erupts just outside the gates of the O’Day estate, chief of security Conlan Shea is first on the scene. With bared fangs, the half vampire, half human gently turns the wounded victim over only to find himself staring into the exquisite turquoise eyes of the woman who ripped his heart out three years ago.

Kat Karr. The name still evokes such turmoil. One night of fierce passion had cost Conlan his life, his job and his heart. Now she’s back, injured and desperate for help. Kat’s in real danger, and Conlan is her only hope. With the enemy fast approaching, Kat is running out of time. Suddenly for Conlan, revenge doesn’t seem so sweet

Savage Redemption is quite a story, the two main characters Conlan and Kat have a heated past. Kat was accused of setting a research facility on fire and killing a man in the process. The one mistake Conlan made was letting Kat work her way into his heart, and once she had his heart she blew it to smithereens. Instead of letting Conlan prove her innocence Kat took off and left him to pay for her mistakes.

This book takes place three years after Conlan got sent to prison for letting Kat, a known criminal get away. These two aren’t ready for what’s ahead of them but they make the most out of it. There is one person that has never stopped looking for Kat and his hired Mercenaries won’t stop until she is found. Kat’s tired of running, but before she can turn herself in she has to find someone to protect her two nieces. Kat finds a safe place that she never expected to end up, in Conlan’s arms.

I loved that Kat wasn’t willing to let Conlan suffer for her crimes again; she was ready to face the music. The price for her crime is execution, and her only request is that Conlan watch out for Maggie and Rose, her nieces. Although I didn’t know her before, Kat just seemed to have grown up quite a bit over the three years that she’s been on the run. The fact that the Ms. Morgan made me feel for the characters so quickly proves to me that she has a talent for creating a world and characters that can become real to any reader.

And of course there are some amazing sexual scenes in these pages. Conlan definitely knows how to please a woman! Though there are as many sex scenes as expected they all had a rushed feeling to them because of the suspenseful feel to the story. The only other thing that I have to say against this book is that the ending and the conclusion to the conflict felt a bit hurried. Obviously a Harlequin is going to be shorter than normal but while I was reading it felt as if Ms. Morgan was trying to get her story to fit into a small amount of pages. Which as you can imagine completely changes the feel of the story, and the expected happily ever after.

This book was a quick, fun, steamy, and suspenseful read and I would recommend it to any paranormal romance fan! I believe this series has a lot of potential and talent. And I would like to see more from Alexis Morgan and the world of the Coalition and Mercenaries.

“After getting a good look at the two girls, he knew in his gut that the woman sprawled there in the bloody dust had eyes the same unusual shade of turquoise as her two nieces. In fact, there were a lot of things he knew about the woman, like she had dimples when she smiled and a straight face when she lied. her full name was Katherine Karr, and three years ago she’d stolen Conlan’s life.”

« Giveaway: Something Witchy This Way Comes (A Jolie Wilkins Novel) by H. P. Mallory
Book Bites: Vintage Harlequin and The Art of Forgiveness by Megan Mulry »
Comments are closed.