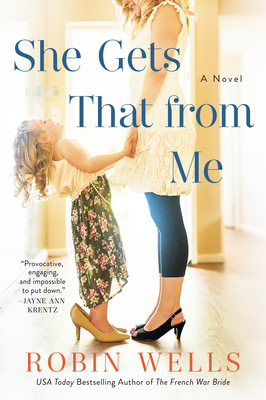 that taps into the nature of love, whether blood is thicker than water, and whether we really do have the opportunity to choose who we consider to be our family.

Throughout, the complications of modern day marriage, fertility, and of course love, are unpacked craftily and with a certain realism that enabled every character to be entirely sympathetic. Very rarely do you find a narrative with such heart felt sincerity that it’s too tricky to determine an antagonist, or at least someone who fits the ‘bad guy’ bill. In this instance however, each character is shaped with such sensitivity, that subtext and motivations are incredibly plausible and understandable. Delivered from the perspective of each character, we travel through the lives and loves of Zack, Jessica, Quinn, Brooke and Margaret, whose relationships become entangled in a complicated and at times heart wrenching way.

Zack, who is like some sort of contemporary prince, is an honourable man, who values his word and who also happened to donate sperm when he was 19 as a way of supporting himself through university. Brooke, beautiful and intelligent, chooses Quinn as her ‘sister’ after being raised by her grandmother Margaret as a consequence of a tragic accident that killed her parents and brother.

Being the self-aware woman she is, Brooke decides to use a sperm donor and indeed her gorgeous daughter Lilly is of course the progeny of Zach who donated over 15 years earlier. Quinn, our central protagonist, who also grew up by and large family-less given a messy divorce and parents who treated who either as a pawn or as a mistake is also contemplating her parenthood choices. Thus, Quinn also chooses to go down the assisted pregnancy pathway, sharing the same donation as Brooke with the idea that their two future children will bring them even closer together, shaping the family neither woman had. And finally Jessica, afraid of her own imperfections, and who struggles to come to terms with her infertility, unintentionally jeopardises her marriage to Zack with a significant breach of his trust. Apart from the betrayals, which are completely human, Jessica, who would potentially be cast as the villain, actually isn’t and in this sticky middle-class mess, all of the characters struggles are made all the more honest and poignant as a result.

Wells demonstrates deep insight into the legislation and complications surrounding sperm donation and the choice to both donate and then, indeed, use one. In many ways, Wells reveals that assisted fertility is kind of like 21st Century adoption, in the sense that the same general rules apply and with it comes the same level of complexity and very real human fears. Mixed parenthood, single parenthood, multi-generational parenthood, donor parenthood and even lack of parenthood are all unpacked with delicacy and an inherent thematic intent that no matter what shape, form or size a family comes in, the only thing that truly matters is love.

In many ways, this was a true song of the resilient nature of love and family. Undoubtedly, the overarching tones of hope, and patience will move any avid reader who is looking for a contemporary love story whose hearty rhythm beats like classic chamber music. Summarily, I highly recommend readers take stock of this one and listen closely to the beautifully honest and tragically human notes within as it is certain to sing to any soul.

When Quinn Langston’s best friend unexpectedly passes away, Quinn embraces Brooke’s three-year-old daughter Lily and elderly grandmother Margaret as the family she’s always wanted. She’ll do whatever it takes to help them heal, but she didn’t anticipate Lily’s biological father would be part of the plan. Margaret is old-fashioned, though, and she has no compunction about finding a way to reach Lily’s dad, a sperm donor. After all, he’s a blood relative, and she believes family should raise family.

Zack Bradley doesn’t know what to expect when he finds out he has a child. Sperm donors don’t usually get to meet their…well, he’s not sure what to call Lily yet, but he’s certain he wants to get to know her. There’s just one of problem: he’s about to move to Seattle with his wife, Jessica, who’s undergone multiple infertility treatments, desperately wants a family of her own and can’t stand the idea of Zack playing daddy to another woman’s child.

Together, they’ll all learn that the human heart is infinitely expandable and there are many different roads to family.

One Response to “REVIEW: She Gets That From Me by Robin Wells”