Sheikh’s Royal Baby Revelation by Annie West: Ashraf was supposed to be the spare but he ends up ascending as the new Sheikh. He’s 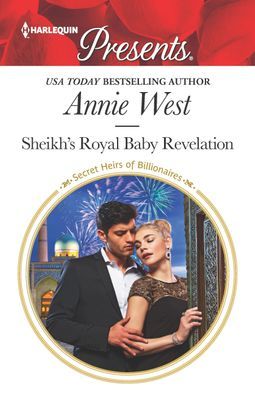 determined to make a lot of changes and implement new programs to benefit his people. He’s used to criticism and being the black sheep of the family.

As a geologist, Tori is used to working mostly with men. She tries not to draw attention to herself and instead maneuvers around the men who try to get in her way. She’s smart, independent, and has no use for pleasing others.

Ash and Tori came together when both were kidnapped. They formed a bond and left quite the impression on each other. After one night, they were separated and didn’t know for sure what happened to the other. Ash is persistent and doesn’t give up on trying to locate Tori only to find out he also has a son.

‘It is you?’
Tori wanted to touch him, to check for herself he was no mirage. But her limbs felt like blocks of basalt. All she could do was stand and stare.
‘It’s me, Tori.’

Tori is surprised on a number of fronts but also relieved to know that Ash is alive and well. Both are still dealing with the trauma of being kidnapped and the fear of what their fates could have been. Tori isn’t quite sure how to deal with Ash and what the future holds but the attraction is still there. Ash may be a sexy alpha, but he shows a lot of patience and restraint with Tori while showing her a far different side to his country.

‘Are you fishing for compliments?’
She spied a flicker of movement at the corner of his mouth and a tingle of delight teased her.
‘No. But I’ll take any you want to throw my way.’ His lips firmed. ‘You’re not a woman easily swept off her feet, Victoria Miranda Nilsson.’

Desert captives for one night

Bound forever by their unexpected baby

When desert prince Ashraf was kidnapped alongside geologist Tori, their desperation to escape their life-threatening situation led to a moment of passionate oblivion. Rescued the next day, Ash was never able to discover Tori’s fate. He’s finally found her… But in their time apart, Tori has had his son! And now Ash will stop at nothing to claim them both!

« Spotlight & Giveaway: Promise of a New Beginning by Addison Cole
REVIEW: All Roads Lead to You by Jennifer Probst »