The Father of Her Sons by Christine Rimmer is the first book in her Wild Rose Sisters series. This 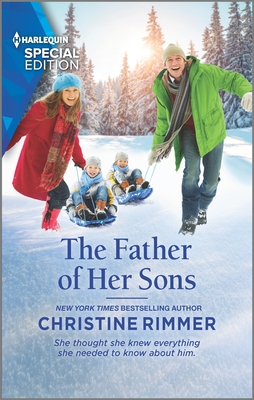 Payton Dahl is a single mother to four-year-old twin sons, Penn and Bailey. She lives in Heartwood, Oregon with her sons, her sister and Aunt M who basically raised her. Payton helps out on the farm there as well as writing fantasy novels. Five years ago before Payton became published she had a part-time job as a bartender at the Larch Tree Tavern in the Heartwood Inn. Payton put up with the hateful manager there because the money came in handy and the hours worked well with her writing. The bar in the Heartwood is where she met Easton. That’s all she knew, his first name. The two agreed to a no strings attached fling so no last names, no sharing cell phone numbers or email addresses. No contact after Eaton leaves. They spend a wonderful week together. At the end Payton refused to change the rules and give Easton her personal information even though Easton had changed his mind and wanted to keep seeing Payton.

Three months later Payton finds herself pregnant with Eaton’s twins. She can’t find him to tell him. Meanwhile Eaton returned to Heartwood six months after he left to try to change Payton’s mind. The mean, hateful manager at the Heartwood Inn who had fired Payton lied to Easton and told him Payton had married and moved away. Fast forward five years…

Easton Wright’s family owns Wright Hospitality, a company that purchases and renovates inns and motels. Five years ago Easton visited the Heartwood Inn looking to acquire the property. That didn’t work out at the time but now that Easton is the CEO of the company he is back to purchase the property. He wasn’t expecting to again see Payton, the woman he never forgot and still loves. He was shocked to learn he is the father of twin boys. Easton wants to unite his family but Payton is reluctant. Easton realizes he needs to be patient but he is determined to have his family together.

The storyline tells a tale of two people who fall in love, lose each other and struggle to get things right enough for a Happily Ever After. I enjoyed how cute the four-year-old twin boys are in the story. The book highlights the value of family and friendship. This is a good beginning to the series.

She thought she knew everything she needed to know about him in New York Times bestselling author Christine Rimmer’s first book in the brand-new Wild Rose Sisters series!

How do you make up for four years of lost time?

No last names. No promises to meet again. No way for Payton Dahl to find the man who’s the father of her twin boys. Until fate reunites them four years later. Easton Wright now wants to be part of his sons’ lives—with the woman he fell hard for during those seven days and nights of bliss. Payton doesn’t want her sons to grow up fatherless like she did, but can she risk trusting Easton when she’s been burned in the past?

Book 1: The Father of Her Sons
Book 2: First Comes Baby…