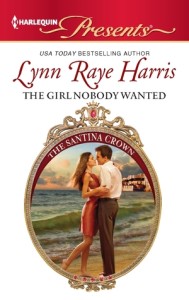 The Girl Nobody Wanted by Lynn Raye Harris

Stop the Press: Jilted Bride Stranded with a Notorious Playboy!

Anna Constantinides, publicly humiliated when her longtime fiancé announced his engagement to someone else, might have thought things couldn’t get any worse. Until her private jet crash-landed on an uninhabited island, leaving her stranded with billionaire hotel magnate Leo Jackson.

Renowned playboy Leo’s reputation is legendary, and if the smoldering looks they were fighting to contain when rescued are anything to go by, there can only be one question on everybody’s lips: Just how long did it take wickedly sexy Leo to undress buttoned-up heiress Anna?

The Girl Nobody Wanted is a passionate read with some action adventure thrown in for good measure.

When Anna Constantinides finds herself unexpectedly jilted by Prince Alessandro her life is thrown into an upheaval. Having spent her life training to be Queen Anna is completely lost as she never had a chance to dream, her life was predetermined for her.

Enter Leo Jackson consummate playboy and brother of the Woman she was jilted for. When Leo meets Anna at the engagement party he is instantly drawn to her like a moth to a flame even though he thinks she is too uptight. Anna is a challenge and Leo totally enjoys ruffling her feathers. When Leo and Anna’s plane crashes and they are forced to spend two days on a secluded island before they are rescued, their attractions to each other gets the better of them.

Anna and Leo make an interesting pair; Leo is a total rogue with a devil may care attitude and Anna worries over anything and everything she can.

When Anna is faced with an unexpected pregnancy, following the heels of her engagement scandal she approaches Leo with a marriage proposition… Leo being Leo upstages Anna’s Plan there as well.

I really enjoyed reading this book, the characters were well drawn out and the dialogues beautifully written. As with any Lynn’s book you get a bit of action and drama thrown in with the plane crash.

I can’t resist mentioning that I absolutely loved the emotional and heartfelt letter Leo wrote to their daughter Lucy on her birth which is included in the last book.

The Girl Nobody Wanted is a great addition to the Santina Crown Series and I would definitely recommend this book.